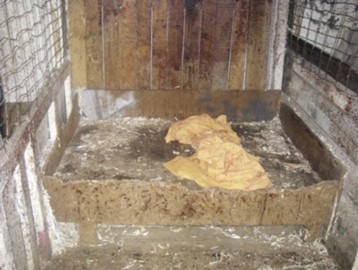 The industry, continually manipulate the public’s perception of welfare standards by promoting the numbers of re-homed retired greyhounds. They have always remained unaccountable and have failed to provide any visual and statistical evidence to support welfare as priority for the racing greyhound.

Last year the National Greyhound Racing Club (NGRC) processed 18,864 Retirement Forms for greyhounds but has refused to publicly declare the fate or fortune of those greyhounds involved.

NGRC rules encourage many economic and cost cutting procedures all at the expense of welfare. Standard practices as for the killing of a greyhound if the injury is uneconomical to treat or the feeding of greyhounds with knacker meat (fallen stock), does not suggest that greyhounds are treated as ‘fine athletes’.

The RSPCA reports ‘Dogs are generally kennelled for 23 hours a day for their entire racing life – if not longer – usually two dogs per small kennel, sharing one bed’ Again this is evidence that the industry considers the health of their bank balances over the health and welfare of their greyhounds.

THIS COMPLIED WITH A TRAINER’S WELFARE STANDARDS

DOES IT COMPLY WITH YOURS?