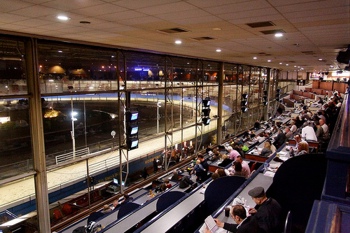 Attendances down at Wimbledon

December’s Greyhound Star reports a dismal end to 2008 for the greyhound racing industry and predicts tracks will be facing an even tougher time in 2009.

Many stadiums have recently recorded a decline in attendances in excess of 20% with even the more profitable tracks such as Sheffield and Nottingham struggling with the credit crunch, along with Perry Barr, Newcastle, Romford, Brighton and Hove.

An industry insider has said  “There will be some tough decisions being made after Christmas. The general feeling is that many tracks will dispense with their midweek meetings altogether during the early part of 2009”

Peterborough have already taken the decision to close on Tuesday evenings throughout January with a possible extension through to February.

The six stadiums collectively saw attendances drop by 10% and restaurant bookings down by 9.9% in 2007. GRA’s annual profits were barely positive at £174,000 (just 0.7% of money through the gate) and this was for the year to last March, before the credit crunch really hit.

On top of this, the owners – Risk Capital – bought GRA with a £52 million bank loan which incurs a weekly £80,000 interest payment AND has to be repaid by next March. Normally they would refinance the loan and borrow another £52 million, but this will be very difficult with banks being slow to lend to anyone in the present climate.

All this adds up to GRA surely looking to make drastic cutbacks while their owners hang on waiting for property prices to rise again, in order to sell the tracks at a profit for redevelopment.