GBGB forced to declare another 87 dead greyhounds throughout 2017

The GBGB has been forced to publish new figures which now show  87 more greyhounds were killed or died throughout 2017 bringing the total to 1,100 – averaging 21 greyhounds every week or at least 3 every day.

Of those 87 greyhounds – a further 47 were killed due to the ‘injury not treated on economic grounds’ or poor prognosis and another 37 greyhounds were killed as they were considered by their owner/trainer as ‘unsuitable for rehoming’. 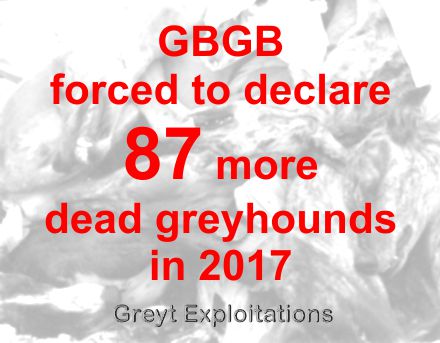 These new figures show that according to the GBGB a total of 8,761 greyhounds raced and left the industry during 2017 – an error of 1,357 compared to the original March figure of 7,404.

Bizarrely the industry stated on both occasions that “These figures have been audited and verified by our own experts and by external, independent auditors”