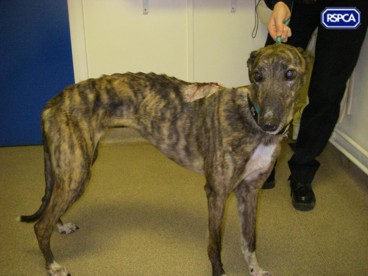 The RSPCA is looking for the owner of a greyhound found wandering around a Middlesbrough housing estate emaciated and suffering a severe scold to her back.

A concerned member of the public called the Society after spotting the female brindle-coloured dog on Sunday 17 May 2009 on the Pallister Park estate.

RSPCA inspector Nick Jones, investigating what happened to her, said: “This poor dog was in a terrible state when she came into our care.

“She was in poor body condition and suffering a very nasty wound which appears to have been caused by some sort of boiling liquid. It’s going to take a long time to heal and sadly is so severe it’s unlikely the hair will ever grow back.”

The dog, which wasn’t wearing an ID tag or micro-chipped, spent several days at the vets before being moved to RSPCA Great Ayton Animal Centre. Staff caring for her there have named her ‘Frida’.

Rebecca Williams, deputy animal centre manager, said: “She’s only been with us for a few days but she seems to be a truly lovely dog.

“She’s doing quite well but there’s a long way to go and we won’t be looking to re-home her for some time yet.”

Anyone who recognises Frida or has any specific information about who her owner might be or what happened to her should call the RSPCA 24-hour cruelty line on 0300 1234 999 and ask to leave a message for inspector Nick Jones.