March and April has seen weeks of intensive action against the Irish Greyhound Board’s proposals to export greyhounds to China and develop greyhound racing in a country where dogs are subjected to horrific cruelty and barbarically killed.

Letters have been written to both the Chinese and Irish Embassies and questions have been asked in the Dail.

A number of petitions have been created opposing the deal. The Care2 petition – now reaching 7,000 signatures – has been signed by both supporters and opponents of the racing industry.

Worldwide protests have hit the headlines – with the AEGA and GREY2K USA first brandishing their banners outside the Irish consulate in Boston. 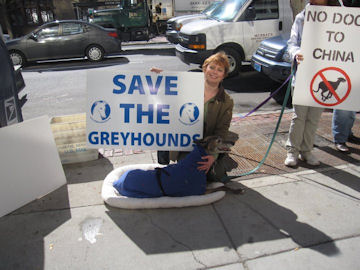 The campaign trail then moved to Ireland where a crowd of 70 people – headed by Greyhound Action Ireland – gave a resounding message to the Irish government in Dublin.

The first of two protests in Britain saw a small but determined group from Greyhound Action Scotland and EVA hold a protest outside the Irish consulate in Edinburgh.

Lastly – supporters and hounds travelled the length and breadth of the UK to the Irish Embassy in central London. Not surprisingly at each and every event – the greyhounds won the hearts of the public gaining masses of support in opposing the deal.

A clear and concise worldwide message has been sent to the Irish authorities – NO to the export of greyhounds to China.

Regardless – on March 25th Adrain Neilan called for “unity and cohesion” from industry stakeholders to support what he simply sees as a “marvellous business opportunity” and a “very significant outlet for our hard-pressed breeders” when speaking at the recent National Greyhound Racing Awards – making no mention of welfare!

Then, in an RTE TV interview last week Mr Neilan was forced to appease the public, saying, “We will ensure that all of our systems are brought to bear, we have the best people, and therein lies the opportunity for employment. We bring people from Ireland over to China to make sure that those greyhounds are well looked after.”

Despite Mr Neilan’s assurances – a spokesperson from Ireland’s Dept of Agriculture has stated  “As with any country, we do not have any influence on the welfare standards adopted in other countries, and these matters are more appropriately dealt with by the country’s own legislative system”

In a country where the governing body fails to account for the lives of 20,000 to 30,000 greyhounds bred annually – we doubt the dogs bound for China will be ‘well looked after’