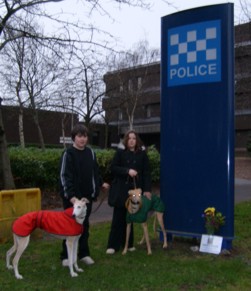 Flowers were laid at Dalkeith Police Station by 11 year olds Kalya Wells and Beinn Rutherford to remember Bushmills Major, the greyhound who died at the police station.  The two young campaigners were joined by two former racing greyhounds Tully and Claddagh.

This gesture was made to mark two years since Bushmills Major was locked in the kennel on 2nd January 2007, with his body found ten days later.

The flowers attached a message in remembrance of Bushmills Major stating “Once forgotten, never forgotten again”

No Police Officer or civilian faced any criminal charges over Bushmills Major’s death.

Campaign group Greyhound Action Scotland Spokesperson said “Its such a tragedy the way that Bushmills Major was left to die in what would have been an agonising death.  What makes this story so much worse was that there was no justice through the legal system for Bushmills Major. But we must not forget that the greyhound racing industry was as much at fault as the police.

The industry causes these dogs to be massively over bred and does nto enforce any responsibility on racing dog owners regarding the greyhounds welfare after racing. If this racing dog owner had responsibly rehomed this greyhound instead of dumping him on a public holiday at the police station claiming he was a ‘stray’, this whole situation could have been avoided.
Police stations are not an appropriate way of disposing of an unwanted dog of any breed. Its unthinkable what this dog must have suffered and its important that he’s remembered after he was fatally forgotten once”.