Christmas comes early when the GBGB announce a huge reduction in the voluntary bookmaker’s levy that funds the industry. A fall of 23% in just 12 months reaffirms the industry’s continued decline which has seen a 50% reduction in funding in the last three years.

The failure of costly television campaigns in an attempt to stem the flow of dropping attendances has also forced the industry to reduce its Marketing budget by 48%.

However – of concern is the welfare budget and not surprisingly the industry continues its failure to take responsibility for the greyhounds that earn them millions of pounds profit as the financing of the Retired Greyhound Trust is cut by 23% and support for track vets and paddock staff slashed by 9%. 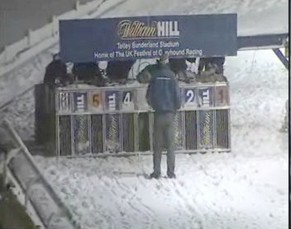 Greyhounds are forced to run in dreadful conditions on December 3rd last year – for the bookmaker owned Sunderland track. 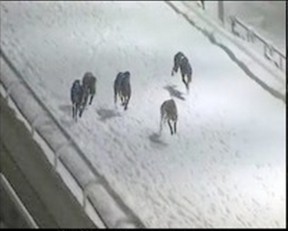 These images are a stark reminder of the industry’s cruel practices that serve only to protect the bookmaker’s profits and revenue for the government whilst greyhounds continue to go unprotected under the Animal Welfare Act.

It is vitally important  that we continue to campaign for greater protection of the exploited greyhound and raise awareness  in order that commercial greyhound racing ceases to exist.

Please click here for a list of greyhound protection groups and to read more on the valuable campaigning work they do in raising awareness – rescue and re-homing.

Many many thanks to all those who have contributed to the greyhound protection movement or helped to rescue – re-home and rehabilitate these innocent dogs.