‘Emily Rose’ Loses The Will To Live 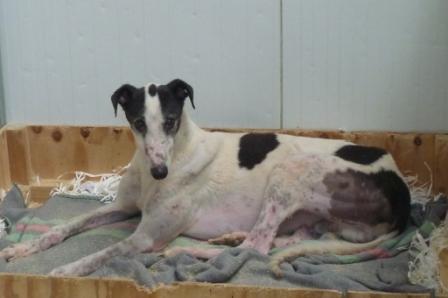 Royal York – suffering a nasal abcess due to a rotten mouth

As with all greyhound rescue, rehabilitation and re-homing centres, the pressure of having to cope with thousands of retired greyhounds, annually – is constant.

But behind the scenes of the fantastic work carried out by an army of volunteers, are the stories of cruelty which are rarely published for fear the abusive owners or trainers will cease to ‘hand over’ or ‘give up’ any further unwanted dogs.

Tia’s latest News page offers an insight into the distressing situations rescues are faced with every day and the frustration felt when forced to deal with abandonment, abuse, threatened or immanent destruction and even death itself.

One of which was Emily Rose, a 4½ year girl, found dead and covered in fleas, having lost the will to live. She is listed on Tia’s Wall Of Shame, in her racing/gambling name – Pablos Jacqui – which now catalogues 777 greyhounds.

Sadly, Emily Rose’s death may have been prevented, had the racing industry prosecuted her owner, a licensed trainer – Nick Bradman – under the Animal Welfare Act, for the cruelty he inflicted on his greyhounds throughout 2008.

For his criminal abuse and neglect  and in a court of law, Nick Bradman would have undoubtedly been banned from keeping animals.

Although completely within their jurisdiction, the racing industry does not enforce the Animal Welfare Act but merely the Rules of Racing – affording owners and trainers protection from criminal prosecution – awarding lenient penalties and the freedom to continue to abuse, neglect and destroy healthy greyhounds, simply to supply the demands of the gambling industry’s requirements for betting ‘units’.

And here to view Tia’s updated Wall Of Shame