Greyhound/lurcher left to starve to death 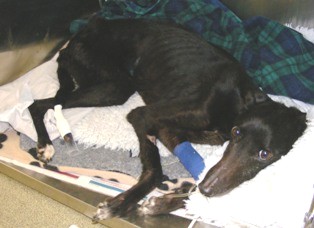 The Scottish SPCA is hunting the callous person who left a starving dog to die tied up inside a plastic bin bag at a roundabout in Dumfries.

Scotland’s animal welfare charity has urged anyone with information to come forward after the dog was discovered by council workers at Garroch Loaning roundabout near Garroch business park, Dumfries, on Tuesday morning at around 11am (11 August).

Scottish SPCA Inspector Janet Proudlock said, Thankfully she is alive, but incredibly emaciated and weak. When I first saw her she was on a drip and collapsed flat out.

After some food she was able to lift her head and even attempted to wag her tail, despite the horrific experience she’s been put through.

We can only presume that someone has carried her on to the roundabout wrapped inside the bin bags and dumped her in the middle of the undergrowth.

We don’t know how long she had been lying there for, but she could have died had it not been for the sheer coincidence that the council workers happened to be clearing the bushes on that roundabout on Tuesday.

She is one very lucky dog to have survived what must have been a terrifying ordeal, but it is still very early days in her recovery and she remains very weak.

The Scottish SPCA warned that anyone found guilty of abandoning an animal and causing it unnecessary suffering could face stiff penalties.

Whoever did this can expect to be banned from keeping animals and they could face a fine of up to £5,000, six months in prison or both, Inspector Proudlock added.

The Scottish SPCA is completely separate from the RSPCA, who operate in England and Wales only.

The Scottish SPCA is subject to Scottish law and, like the police in Scotland, is a reporting agency to the Crown Office, a status far greater than that afforded to the RSPCA.

Animal Welfare is also a devolved issue in Scotland and the Scottish SPCA is in effect a legally recognised defender of animal welfare on behalf of the Scottish Government, which again is a status the RSPCA does not have in England and Wales.