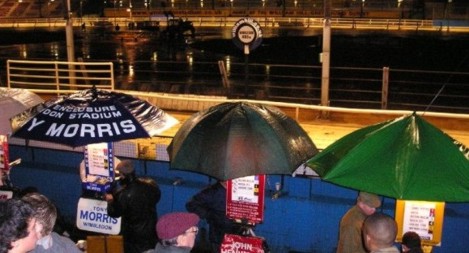 Nationally, attendances at dog tracks dropped by 3.2% during 2008 and despite the gambling industry’s heavy TV marketing campaign and endless freebies advertised through local media, greyhound racing is fast becoming a dwindling spectator ‘sport’ – leaving it fourth in the ranks of popularity, followed by cricket.

Further evidence can be seen by the huge reduction of licensed trainers. According to the GBGB website, the number of registered trainers has fallen by 14% since 2008 but most importantly greyhound breeding figures are continuing to fall both here in the UK and Ireland.

Latest figures from the Greyhound Racing Association – just one of a number of promoters – recorded a 15.3% fall in attendances together with an 11% drop in revenue and only the sale of their Portsmouth track prevented the company from making a pre-tax loss of £1.6m.

GRA own five tracks throughout England – Birmingham’s Hall Green and Perry Barr, Manchester’s Belle Vue, Oxford and Wimbledon. In a bid to save what must be a short term future of the last remaining London track – Wimbledon – the GRA have taken drastic action by not only dropping the loss-making midweek Tuesday race meeting but have also announced the closure of the main grandstand and will now operate solely from the smaller stand on the back straight.

The cost of upgrading the smaller stand is estimated to be in the region of 400K and 50% of the funding is anticipated to come from the gambling industry. The very same industry who claimed in their response to the recently proposed welfare regulations that installation of heating in trackside kennels – to maintain an ambient temperature – was deemed ‘unnecessary and indeed will be extremely difficult to maintain’ – or to be more precise, an unnecessary expense.

And whilst the industry continue to market a fun and glamorous night at the dogs, where punters can wine and dine in plush surroundings – behind the scenes, the industry’s so called ‘fine athletes’ will be confined to unheated kennels for hours on end with only a coat to keep them warm.

Let us not forget, the now dilapidated Walthamstow stadium, received nearly half a million pounds in improvement grants from the gambling industry shortly before its forced closure – is history about to repeat itself?

There are weekly leafleting campaigns held at three of the GRA tracks – Belle Vue in Manchester, Hall Green in Birmingham and Wimbledon in South West London.

If you would like to actively campaign in raising the public’s awareness at any of the above stadiums, please phone Greyhound Action on