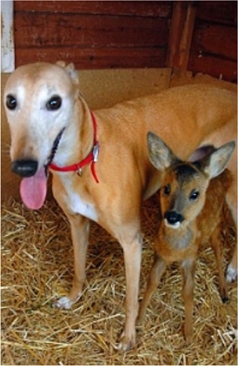 When police rescued a greyhound they named Jasmine from a locked garden shed she was covered in dry mud, shivering from the cold and starving. They brought the abandoned dog to the Nuneaton and Warickshire Wildlife Sanctuary where she could be nursed back to health. Now she has repaid their kindness by taking care of other orphaned animals.

Last year, seven-year-old Jasmine became a surrogate mother for her 50th four-legged baby. This time it was an orphaned baby deer named Bramble that was taken to the wildlife preserve. But since arriving in 2005, the greyhound has been the foster mother to five fox cubs, four badger cubs, 15 chicks, eight guinea pigs, two puppies and 15 rabbits. She showers her babies with kisses, cleans off their matted fur and cuddles next to them to keep them warm.

Geoff Grewcock who is director for the sanctuary says, “As soon as an animal is brought in, she walks over, takes a sniff and then licks and cuddles them. She takes all the stress out of them and it helps them to not only feel close to her, but to settle into their new surroundings.”

Jasmine shows her gentle nature and kindness to more than the homeless animals, she has also become the official greeter to children visiting the animal sanctuary.

Jasmine and her new baby are inseparable. The little fawn can be seen walking between Jasmine’s legs as she gives out kisses. Bramble will remain with his foster mum for the next couple of months, but the sanctuary hopes he will be able to return to the forest when he is older.