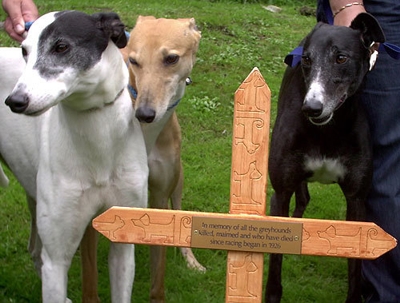 Greyhound Remembrance Weekend sees flowers laid at stadiums in memory of the 100’s of thousands of greyhounds who have died at the hands of the racing industry and a host of ‘awareness’ campaigns are held nationally including street stalls and media appeals.

The powerful ballad ‘Racing to Death’ by Maria Daines and Paul Killington is officially released in conjunction with the anniversary of the Seaham Slaughter and Greyhound Remembrance Weekend.

July 16th marked the second anniversary of Daniel Foggo’s exposure of the Seaham Slaughter in the Sunday Times. The exposure sent shockwaves around the world and has had the most dramatic impact on the decline of greyhound racing to date.