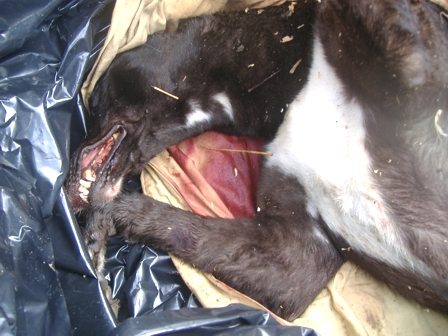 Yate, Bristol – In what is believed to have been a horrific act of cruelty, a greyhound who was heavily pregnant with six puppies was apparently killed and dumped on wasteland in the village of Iron Acton near Yate recently. She was found on 14 February. Her ears had apparently been cut off in order to prevent the authorities from using her identification tattoos to trace the culprit.

PETA is offering a reward of up to £1,000 for information that leads to the arrest and conviction of the person or persons responsible for this horrific crime.

This disturbing incident follows reports about a spate of cruel attacks in the area, including two cat shootings and the killing of another dog who was also dumped. Bristol residents have good reason to be concerned about cruelty-to-animals cases such as these.

PETA is urging residents to keep a watchful eye on their animal companions and to keep them indoors. Because animals cannot report their own abuse and can do little to fight back, they are the perfect “practice” victims for those who tend towards violence.

“Animal abusers are cowards”, says PETA spokesperson Suzanne Barnard. “They take their issues out on the most defenceless beings available to them.”

For more information about the link between cruelty to animals and violence to humans, or to find free humane education resources, please visit