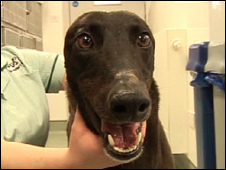 Although Dougie’s ears – cruelly stamped with identifying tattoos at the tender age of 10 weeks – have now been cut off, it is still possible to identify him through DNA sampling – if he was bred in Ireland.

Please watch the news report below and wonder how this gentle, passive and obliging breed can sustain such torture yet continue to be so forgiving.