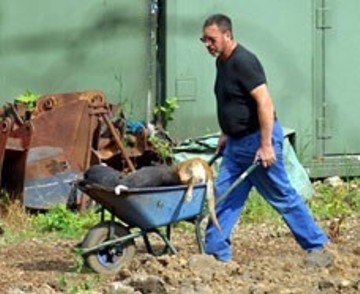 Those that have survived the culling and the injuries are now faced with their inevitable retirement, some as young as two years old. The very lucky ones will be retired as companion animals. The not so lucky will receive the same fate as the puppies that won’t chase or perform.

Young and old alike are destroyed once they no longer serve a purpose and become a financial liability. As tools of the trade, a greyhound commands no compassion. The only consideration is profitability within the confines of public acceptance and this is why the life and death of the racing greyhound, from cradle to grave, is kept so secret and hidden from public view.

This was evident when David Smith’s slaughtering service at Seaham was exposed by The Sunday Times in 2006.Despite being previously ‘temporarily warned off ’ behind the closed doors of the NGRC, David Smith was allowed to continue with his greyhound disposal service, eventually slaughtering an estimated 10,000 greyhounds with a bolt gun and charging a fee of just £10.00.

The RSPCA reports “At least 20 greyhounds a day – either puppies which do not make it to the track, or ‘retired’ dogs aged three or four – simply ‘disappear’, presumed killed” With mass produced greyhounds costing as little as £200 and humane euthanasia by a vet, costing £80, its not surprising many trainers resort to finding an alternative cheaper means of disposal.

MANY OF THE RACING INDUSTRY CONSIDERED THIS ECONOMIC AND ACCEPTABLE

DO YOU FIND IT ACCEPTABLE?