Dogs that Did Not Finish – DNF

During 2013 a total of 43 dogs were unable to physically finish their race at Crayford because of an injury or incident. For 30 of those dogs – listed below – it was their last race and are now unaccounted for. Please click on a dog’s name to view their racing history. ‘DNF’ determines the dog did not finish the race.

For example Cloncool Apache’s racing history shows he last raced on 26.03.13. at Crayford and did not finish the race. The racing remarks indicate he missed the break at the traps – crowded and fell at the first bend and then stopped. 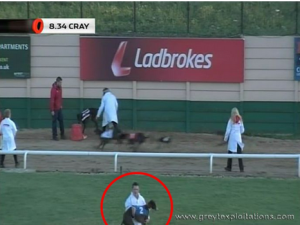 Lynton The Daddy carried off the track after failing to finish in what was to be his last race on 15.06.13.

Dogs that finished a distance behind the leading pack – DIS

A further 290 dogs were still able to physically finish their race but finished a long distance behind the winning pack because of an injury or incident. For 65  of those – listed below – it was their last race and are now unaccounted for. Again – please click on the dog’s name to view their racing history. ‘DIS’ determines that the dog finished too far behind the leading pack for the distance to be measured.

For example Gorgeous Stevie’s racing history shows he last raced on the 11.01.13. at Crayford after finishing last but too far back for the distance to be measured and the racing remarks indicate he was crowded at the first bend and at the half way mark and checked at the 4th bend.

Crayford do not record additional dogs that finished lame.

Please note – the above numbers only represent dogs that did not race again after suffering an injury. There will be many more dogs that ran their last race at Crayford in 2013 uninjured but deemed too old or slow to perform for the gambling industry.

Some may have been homed by the industry’s homing scheme or sold on to independent tracks. Some may have been sent to universities for research and dissection or some may end up being given away – without any checks of the suitability of the adopter.