Dangerously configured with its four acute bends and long fast straights – Romford’s dog track is no different to any other in the country and as the statistics will prove – the racing of greyhounds on this track is nothing more than industrialised cruelty.

Veterinary Graham Oliver states “It is a matter of fact – in racing – dogs do get injured. The fact they race round an oval circuit means that as they all come together at the first bend there are a number of collisions and that can result in injury. A lot of injuries may be minor – there may be bruising but some of them can be more major and involve fractures – particularly hock fractures and the majority of dogs that suffer a significant fracture do get euthanised – which is a shame” and for many hundreds of greyhounds nationally – the FIRST bend is often the LAST.

With the pressure on trainers to supply a gambling product for the industry – many dogs that race are already carrying an existing injury and quite often become lame during a race. Sadly – a greyhound will still keep running if at all mechanically possible because the pain from a broken/fractured leg or torn muscle is masked by the adrenalin the dog is producing in a heightened state of excitement.

In 2013 there were a total of 323 dogs recorded as either did not finish or finished a long distance behind the winners at Romford. Official racing comments use the abbreviations for these type of incidents as DNF and DIS respectfully. On track injuries occur because of either a collision or inflammation of an existing injury brought on by the physical stress of racing.

Of those 323 dogs that were involved in a serious incident – 84 have never raced again and their fate/fortune remains unknown because the Greyhound Board of Great Britain does not publish the injury or destruction rates they are required to record by law or details from a dog’s Retirement Form.

The GBGB are quick to propagate that X amount of dogs are homed annually but their racing details are not published and therefore these 84 dogs must be seen as ‘unaccounted’ for.

However – on occasions the Racing Post reports on a small number of fatalities – such as Listen To This – who was destroyed by Romford’s track vet on April 12th 2013. 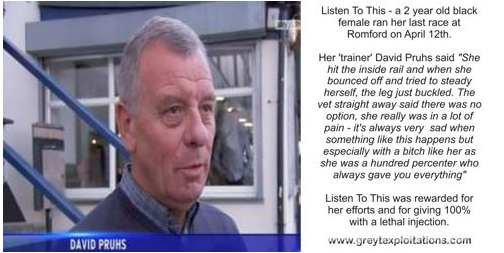 As with all tracks children are permitted entry and are exposed to not only distressing scenes of dogs sustaining injuries but are also exposed to the gambling that sustains the industry – as can be with seen this guardian who carries her baby into the gambling ring to lay a bet. 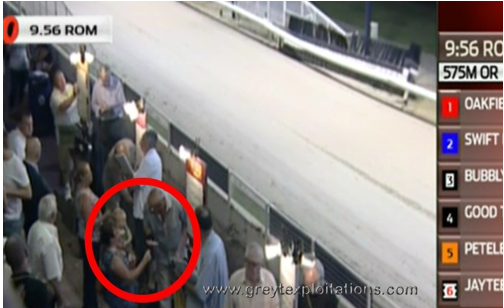 Please click here for the names and numbers of dogs that never raced again after sustaining an injury – Dogs unaccounted for following an injury or incident Romford 2013.