In Memory of Clash Nitro & Rent A Flyer

July 12th  marks the anniversary of Clash Nitro’s and Rent A Flyer’s slaughter who were caught on camera being led to their deaths in Seaham County Durham – 2006.

Every year Greytexploitations lay flowers at the burial grounds and hold a few minutes silence while holding in their thoughts the thousands of innocent greyhounds that were so brutally slaughtered with a bolt gun.

Let us not forget Clash Nitro and Rent A Flyer and also the thousands of greyhounds who’s unnatural deaths go unrecorded every year – simply to supply betting ‘units’ for the gambling industry and revenue for the government. 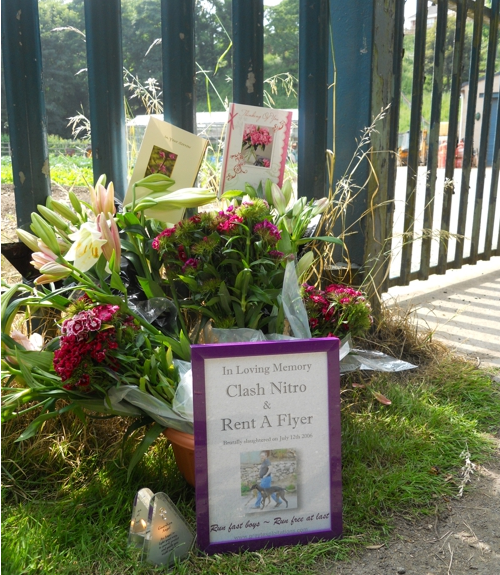 ~ May they all Rest gently in Peace ~

Please light a candle – take time to reflect and hold these innocent and trusting souls in your thoughts…….

Viewed through eyes, well hidden, not seen
That silently watch and wait,
The story they’re chasing begins to unfold,
As the hounds reach the garden gate

Like lambs to the slaughter, these innocents so trusting
Move forward whilst sniffing the air,
Their owners partaking in the drama unfolding,
Don’t know that those eyes are still there

The man with the gun, a hard bastard for sure,
Moves off with two Greyhounds and pockets a score,
Whilst those who so callously decreed these hounds’ fate
Move away from the crime scene, as eyes watch and wait

Those unwilling eyes watch, disbelieving,
Heavy- hearted they know what will come,
Well informed, so they’ve heard all about him,
This man and his treasured bolt gun

They savour this vision, these hounds lithely moving,
So willing to enter that shed,
Now ears hear the gunshots, one for each Greyhound,
Ears tell the eyes they are dead

So sad now those same eyes scan the horizon,
In order to view the last act,
What was hearsay and gossip, an industry secret,
Now recorded forever as fact

Rent a Flyer, Clash Nitro, two innocents now named,
Executioner and cohorts, identified now shamed,
Their arrogance and callousness has made them despised,
All thanks to these Greyhounds and two pairs of eyes

Please click here for the full story of the Seaham Slaughter