In Memory of Snip Nua 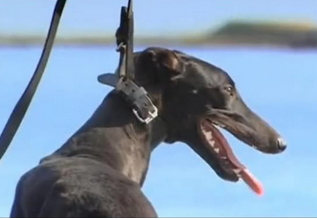 Today marks the anniversary of Snip Nua’s tragic death in circumstances that saw her affluent syndicate owners – to include comedian Dara O’Brien – deny her veterinary treatment for a racing injury.

As with all racing greyhounds – Snip was purposely bred into the world of dog racing simply to entertain her owners and generate money for the gambling industry and once she could no longer fulfil those duties and of no use for breeding – her fate was sealed.

More tragically – the BBC featured Snip Nua in the TV show Three Men Go To Ireland and  promoted  greyhound racing and Snip to an international audience – fully in the knowledge that she had already been destroyed weeks before the programme in which she starred was broadcast.

Please light a candle and spare a few moments silence for not only Snip Nua but the thousands of greyhounds who are needlessly destroyed by the racing industries worldwide – who condone and effectively promote the destruction of dogs once they can no longer race.