In Memory of Rusty 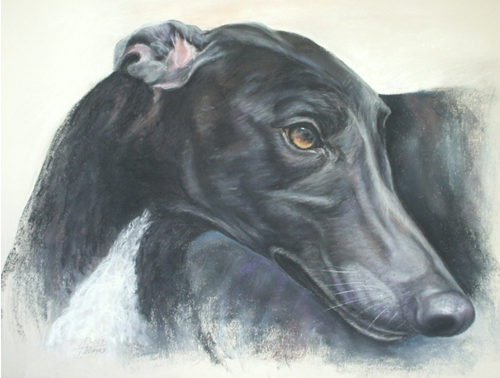 On Sunday May 2nd 2004 a young male greyhound was found by a dog walker – whimpering in a rubbish tip on a remote hillside in South Wales.

Rusty had not only been shot through the skull with a captive bolt gun – his ears had been hacked off in an attempt to prevent his former ‘owner’ from being identified through the racing tattoos in Rusty’s ears.

Despite being tortured – mutilated and left for dead three days earlier  – Rusty was still alive and wagging his tail but his injuries were so extensive Rusty was later put to sleep by a vet.

Following a public outcry and an extensive investigation – Rusty’s executioner was tracked down and Andrew Gough was bought before Caerphilly Magistrates Court on December 22nd 2004.

It emerged during Gough’s trial that Rusty’s owner and trainer had handed him over to Gough to kill for the cut-throat price of just £10.

Gough was sentenced to 6 months imprisonment and banned from keeping animals for life for his vile and heinous crime.

While Rusty was sentenced to excruciating pain and torture – which ultimately resulted in his death – his only crime was to have sustained a broken toe – rendering him too slow to race.

Please hold in your thoughts – not only Rusty but the 10,000 greyhounds bred for British Racing that remain unaccounted for each year – means of death unknown.

His owners paid ten pounds to end poor Rusty’s life,
His killer took the money, he didn’t think twice.
He was raced three times that week with a injured toe,
Because of the injury, his racing times were slow.

His owners said, “get rid of him we can’t do with this”,
The trainer said “just leave him here, I will do the biz”.
Poor trusting Rusty went along with this man,
He thought he was going home, and jumped into the van.

Little did he know this was to be his last day,
And that his poor mutilated body was to be dumped so far away.
With both his ears hacked off, a crude bolt gun to his head,
His killer turned his back, and left poor Rusty for dead.

A lonely walker found him lying in the grass,
It was poor Rusty’s whimpering that stopped him walking past.
In spite of his misery and injury’s he still continued to wag his tail,
Not once did he show aggression, or even admit a wail.

Even now he still showed trust in the human race,
The vet shook his head sadly, as he looked at Rusty’s gentle face.
So the vet inserted the needle, that would end Rusty’s suffering at last,
He knew his abuse was over, he would not have to remember his past.

But your death will not be in vain dear Rusty; we will keep your memory alive,
And your murderer has been caught and punished, and brought to the public eye.
So rest well dear Rusty, free from suffering and pain,
No more will you know abuse, or ever race again.