In Memory of Rotor Wing

On July 14th 2011 at 8.15 pm Rotar Wing – a 3 year old black male – was about to run his 80th race at Sunderland dog track. The race was part of the William Hill Festival of Racing and was broadcast live on Sky Sports. 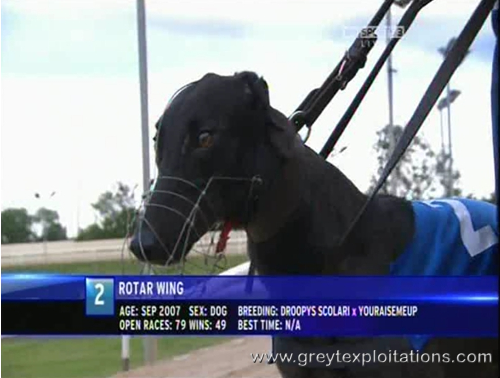 Despite sustaining a serious injury just 10 days earlier in what trainer David  Pruhs describes as a ‘nasty fall’ and also confesses to Rotar Wing  ‘ getting a rough ride lately’ – Pruhs is confident that the race will be easy for the champion dog.

In an attempt to promote the industry as a healthy sport enjoyed by young and old – presenter Julie Collier interviews the 13 year old son of a trainer – who’s dog is competing in the same race. While Patrick nervously clutches his race card and reels off his prepared response – a handful of children  no more than 10 years old  play on the barriers in the background amidst grown men drinking – smoking and no doubt discussing their chances of a winning bet.

Less than 2 minutes to go and the commentator focuses on the real issue of gambling as Rotar Wing is paraded before the punters and loaded into the traps.

The traps fly open and Rotar Wing is the first to show but within a matter of yards he crashes down – twisting and turning before he hits the track.  As he attempts to stand his legs buckle beneath him and he collapses in a heap in horrendous pain. 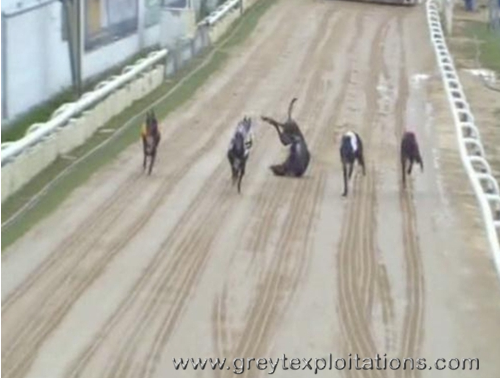 This is to be the last time Rotar Wing feels the sand beneath his feet and the wind rush along his sleek muscular body.

But the race must go on – thousands of pounds worth of bets have been placed and the presenter continues his commentary with the usual enthusiasm while Rotar Wing suffers excrutiating pain – with what we now know to be a broken back.

The utter disregard for the welfare of greyhounds by the industry is epitomised by the trainer of the winning dog – Ann Lagan – who appears incapable of showing any genuine remorse for Rotar Wing. Unable to contain her excitement – she can be seen smirking as she says of Rotar Wing “Whatever happened to ‘it’ is sad but what can you do?

The final word goes to professional trainer David Pruhs – quoted a local paper Pruhs says “It will be hard to replace him but at least we can look back on two years of excellent racing from him. He was a real star.”

Video footage of the interviews and Rotar Wing’s tragic race

Rest gently in peace Rotar Wing – your suffering will be remembered by those who never knew you and by those who will always care.