Did the BBC callously dismiss the deaths of 2 greyhounds?

Thank you to the hundreds of supporters who emailed the BBC and voiced their concerns over the broadcasting of Three Men Go to Ireland/Three Men in a Boat.

Many apologies for the delay in bringing you this update on Snip Nua but we have been delayed by trying to resolve some concerns raised by the BBC.

Sadly – despite editing the article as requested – the BBC still considers the contents of our article ‘Did the BBC Callously Dismiss the Deaths of Two Greyhounds?’ to be ‘highly defamatory and misleading’ requesting the article to now be removed.

However – we are satisfied the article is factual and the question ‘Did the BBC callously dismiss the deaths of two greyhounds?’ was and still is justified  – according to our knowledge of commercial greyhound racing and our ethical beliefs.

The BBC has also failed – to date – to publicly respond to supporters complaints on the BBC’s website, despite the BBC responding to veiwers complaints regarding the mere insinuation of a dog being killed in Eastenders.

Shortly after our last update the Irish Mail on Sunday published an article headlined ‘Dara’s dog starred in Three Men after she was put down’. An article which the newspaper claims ‘raises questions over the treatment of animals in the world of greyhound racing’ 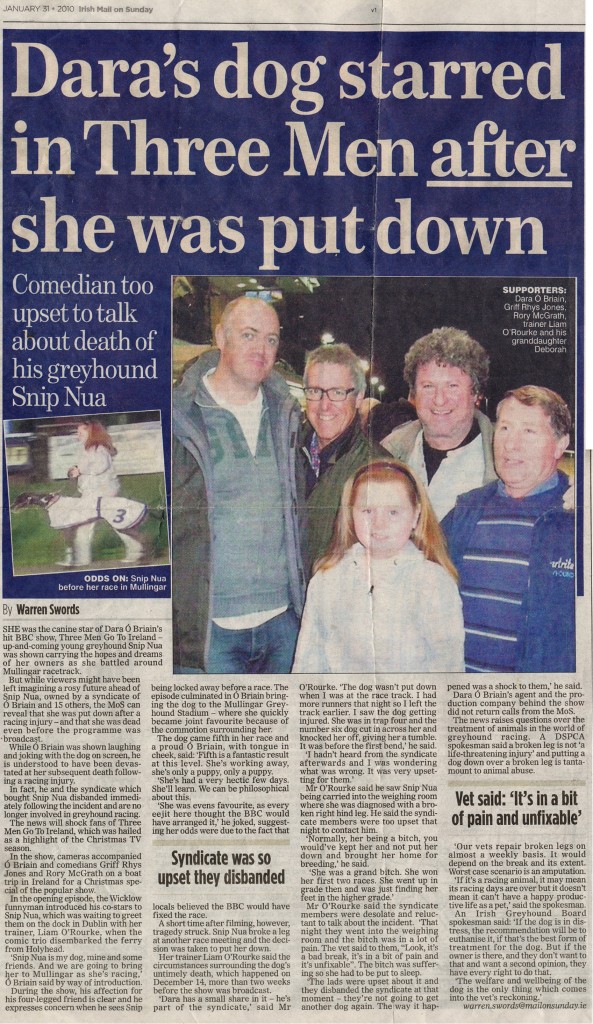 The Irish Mail on Sunday describes Snip Nua as a ‘canine star’ and BBC ‘viewers might be left with the impression that a rosy future lay ahead for her’ – which as we know is in complete contrast to her being destroyed on December 10th, more than 2 weeks before the programme was broadcast.

Describing the events of that fateful night – Snip’s trainer, Liam O’Rourke said he witnessed Snip Nua being injured and carried into the weighing room where she was diagnosed with a broken right hind leg. He said ‘Normally her being a bitch, you would’ve kept her and not put her down and brought her home for breeding. She was a grand bitch. She won her first two races. She went up a grade and was just finding her feet in the higher grade.’

The attending vet advised the syndicate members ‘Look it’s a bad break, it’s in a bit of pain and it’s unfixable’

‘Our vets repair broken legs on almost a weekly basis. It would depend on the break and its extent. Worse case scenario is amputation. If it’s a racing animal, it may mean its racing days are over but it doesn’t mean it can’t have a happy productive life as a pet’ said the spokesperson.

An IGB spokesperson said ‘If a dog is in distress, the recommendation will be to euthanise it if that’s the best form of treatment for the dog. But if the owner is there and they don’t want that and want a second opinion, they have every right to do that’ and claimed ‘The welfare and wellbeing of the dog is the only thing which comes into the vet’s reckoning’

Dara O’Briain’s agent and the production company behind the show did not return calls from the Irish Mail on Sunday.

The destruction of Snip and 10’s of thousands like her – only serves to treat the reckless over breeding of greyhounds and failure of the industry to take responsibility and care for their dogs once they can no longer race.

Many of you will already be aware, confirmation has officially been received of Snip Nua’s destruction at Harolds Cross dog track on December 14th after sustaining a broken hock, in what we now know to have been her last and fatal race.

Snip Nua, at the tender age of 19 months, competed in just 7 races before she was deemed a financial liability by her 16 affluent syndicate members, to include the Business Editor of the Irish Times – Frank McNally and of course the ‘joker’ in the pack, Dara O’Briain.

Perhaps the track vet – who advised Snip Nua be destroyed – should have considered the valued opinion of specialist greyhound vet Dr Alessandro Piras. Alarmed by the number of greyhounds destroyed because of injuries, Dr Piras claims “The only cases where fractured bones need result in a greyhound being put in sleep is for a broken spine  and even then, not in all cases.”

There are many greyhounds, who due to sustaining a racing injury, have a leg amputated and have gone on to live perfectly happy normal lives.

If you are a registered Twitter user and would like to send a personal message to Dara O’Briain, his page can be found here

Did the BBC Callously Dismiss the Deaths of Two Greyhounds?

On New Years day the BBC aired another shameful piece of pro racing propaganda – Three Men in a Boat – and on a day when last year’s Christmas Special had the BBC’s highest rating over the festive period, with 5 million viewers.

The Three Men in a Boat – Rory McGrath, Griff Rhys-Jones and Dara O’Brian – as part of their travels across Ireland, visit Mullingar dog track on October 10th, to gamble on O’Brian’s jointly owned greyhound, – Snip Nua – in an aptly named race  “Three Men In A Boat 525”

In preparation, the programme’s producers – Liberty Bell – attend the track a week in advance and according to Philip Peake, the tracks General Manager, ‘were very impressed with the facilities and atmosphere at the Stadium’ and added ‘the visit of one of the BBC’s top rating programme’s is not only great publicity for greyhound racing and the Stadium but also with other activities planned around the locality it’s a fantastic opportunity to showcase the region to an international audience’.

Snip a 19 month old female puppy with only 3 recorded races finishes 5th but at least she finishes to race again – unlike Redwood Rio who crashes into Snip Nua – off camera – and hasn’t raced since.

On December 14th, at least two weeks before Three Men in a Boat is aired, Snip runs her 7th and what has been alleged to be her last race at Harolds Cross dog track.

Whilst punters are celebrating the festive season and gambling on the survival of the fittest, Snip is knocked over soon after the dogs leave the traps. She can be seen desperately struggling to continue the race – with her hind leg flailing in mid air before the cameras leave her to follow the race.

Not only do the cameras leave her but so does everyone else and Snip – clearly suffering an horrific injury – labours another 200 yards to the back straight before she is caught by the rest of the pack.

In an interview with the Sunday Times -2006 – O’Brian, when asked ‘What has been your worst investment?‘ replied ‘I once joined a greyhound syndicate with some journalists, barristers and the business editor of The Sunday Times (Ireland). We have owned six dogs so far, with one victory in total, in the last seven years. Instead we have just bled cash, and there’s no sign of clotting yet. I haven’t even lived in the same country as the dog in the past five years, but still the standing order keeps going out’

The ‘Three Men in a Boat’ at Mullingar Dog Track


Regardless of Snip’s fate the promotion of an inherently cruel ‘sport’ by the BBC is unacceptable and misguided to say the least.

Please complain to the BBC and the programme makers listed below – request the public must be made aware of the harsh reality of greyhound racing – Snip Nua’s and Redwood Rio’s fates must be published.

Please also complain to the agents handling Rory McGrath, Griff Rhys-Jones and Dara O’Brian and avail them of the TRUTH behind this exploitative industry.

Please add this link to the video of Snip’s horrific accident and please remember it is important to keep correspondence polite.

The Three Men in a Boat

Many thanks, as always, for your care and compassion for the greyhounds