A Bit of a Flutter

On Tuesday June 26th – BBC1’s EastEnders featured a discussion between father and daughter on a suggested visit to ‘the dogs’. More specifically the gambling on dogs was referred  to as a ‘bit of a flutter’ This particular episode of Eastenders topped 7.5 million viewers – with many more watching on BBC iPlayer and repeats – a large percentage will have also been under 16.

This clip – albeit brief – is the latest in a long list where the BBC have accentuated greyhound racing and comes swiftly after a feature highlighting dog racing on Question of Sport. The complaint of which has yet to be resolved.

Recently the BBC also positively promoted racing and the gambling on dogs during Colin Murray’s Kicking Off show – by following the fate/fortune of a young female greyhound  called ShowMe TheBunny. Further to complaints this feature has now been withdrawn by the BBC.

These instances are not the exception and in recent years the BBC have shown racing and the gambling on dogs – on several occasions – in a very positive light and on what the BBC describe as ‘Factual’ programmes.

Matthew Wright promoted dog racing as ‘always a good evening out’ on Inside out London in a feature promoting Romford dog track.

And who can forget the BBC’s shameless promotion of dog racing to an international audience during the Christmas special of Three Men Go To Ireland. A programme that was aired weeks after the young 18 month old female puppy – Snip Nua – had been destroyed following a racing injury. The BBC felt no need to ‘flag up’ Snips track-side destruction and left viewers believing that Snip Nua was alive and well. The BBC have since edited any reference to Snip Nua from repeat broadcasts of this programme.

We have also seen inordinate amounts of TV and radio coverage of the campaign to reopen Walthamstow.

In this respect – it is time the BBC acknowledged those views of the licence fee payers who feel dog racing is cruel and also publicly acknowledge that dog racing is not a sport but a gambling industry that generates millions of pounds for the government. Regardless – the BBC have a duty to remain impartial in its reporting and we fail to see how they can possibly remain impartial when it promotes a self policing industry that is not open and transparent to scrutiny and one that has consistently failed to enforce its Rules of Racing.

As we approach the sixth anniversary of the Seaham Slaughter – the self regulated industry still fails to account for thousands of dogs bred to sustain its industry every year. The GBGB claim that just over 7,000 greyhounds are registered to race annually but according to the industry’s Retired Greyhound Trust TV advert – 9,000  greyhounds retire each year and if we are to believe the RGT – then by the industry’s own admission – they fail to account for at least 5,000 greyhounds every year. This figure does not include the thousands of puppies bred for British racing that are culled – deemed too slow to make the grade as racers.

Please write and complain to the BBC regarding their general promotion of dog racing as a sport – while failing to acknowledge the views of licence fee payers who consider dog racing to be inherently cruel. Please also remind them of their failure to accentuate/broadcast the extensive evidence of this cruelty.

When filling in the complaint form – please remember to highlight ‘General BBC’ and ‘Bias’ in the drop down menus when prompted. 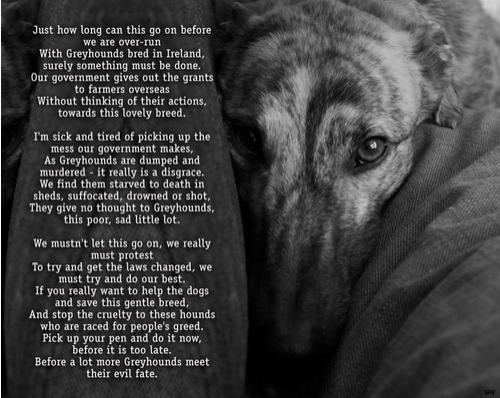