We were first alerted to the appalling conditions at the ZigZag kennels in late 2009 following a tip off from local residents in Dunholme on the outskirts of Lincoln but it wasn’t until investigators visited the kennels did the true extent of the ghastly conditions at Pickering’s stud and puppy farm come to light.

To view the evidence please click on the thumbnails below. Photographs and videos were taken in February/March/April of this year – except for the mouldy food photograph and 1st video which were taken in November 2009.

Investigators visited ZigZag kennels on a number of occasions and it soon became apparent greyhounds were receiving virtually no human contact or any signs of veterinary treatment, let alone an element of care.

West Lindsey Council granted Mr Pickering temporary planning permission to operate his business – breeding, keeping, training and exercise of dogs – in February 2007, for a period of 12 months. Condition 3 states ‘No dogs (including bitches) of more than 8 months old shall be kept outdoors’ and clearly Pickering has been in breach of this planning restriction.  More alarmingly, West Lindsey Council recently confirmed Mr Pickering has failed to submit a further planning application since 2008 and has been operating his business without the necessary planning permission for the past two years. 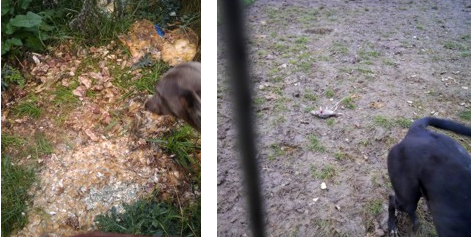 Adult greyhounds – commanding high stud fees – are kept outside in conditions comparable to pigsties. The food is thrown over the stock fencing and directly onto the ground in each run – encouraging rats to breed profusely and feast on the mouldy and rancid food. Pens and runs are littered with old bones, diarrhoea and in this case – a dead rat!

Some younger puppies were found straying wild – having to fend for themselves by living off whatever scraps of food they can find and had to seek shelter under hedgerows, whilst some puppies were penned with pigs. Both young and old are forced to drink from troughs containing stagnant water and dead vegetation. 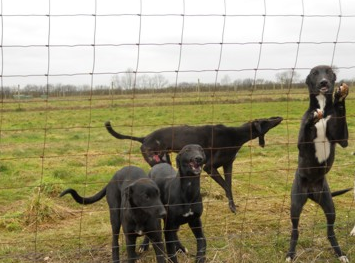 It’s the survival of the fittest in the dog eat dog world at ZigZag kennels. None of these serious injuries had any obvious signs of being treated – torn loose skin  and exposed muscle were left open to infection.

Investigators describe the barn as dilapidated, rat infested and despite the kennels being exposed to the elements of wind and rain they still reeked of urine and excreta. It was clear during visits, no one had tended to the dogs for some time, as the kennels were heavily soiled and some water bowls were empty. None of the dogs wore collars  and there were no leads or muzzles kept in the barn. Local residents said they had only ever seen one employee tending to the dogs, which led investigators to believe these breeding dogs were never exercised.

ZigZag Peggy’s long standing injury has prevented her from placing any weight on her leg for at least six months and the overgrown dew claw embedded into the pad, indicates the lack of care this poor girl has received.

Since her last litter in July 2006, ZigZag Picture has festered in this dark damp barn and out of sheer boredom has gnawed away whole breeze blocks of the partition wall.

Investigators became concerned for the welfare of a very nervous and heavily scarred male. On a subsequent visit, the dog had gone only to be replaced with a mass of blood splattered on the wall of his kennel. Another dog had a cut to her tail which left blood smeared across the kennel walls. There were no signs of this dog having received any treatment for the wound.