Breeder Driven Out by Sunday Express

The largest greyhound breeder in Britain – Charles Pickering – can no longer commercially breed greyhounds for the licensed racing industry thanks to a Sunday Express exposure supporting an undercover investigation of the ZigZag puppy farm and kennels.

The external media pressure from a national newspaper forced the GBGB to hastily conclude its three year investigation and make Pickering a ‘Warned Off’ person for offences whereby he falsified documents and failed to account for the whereabouts of dogs between January 2007 and February 2010.

By comparison and in 2009 – Greyhound Watch took just a few months to compile an in-depth survey – establishing that Pickering bred and licensed 198 puppies between May 2005 and June 2006. Of those 198 puppies only 46 went on to race on GBGB tracks – leaving 152 dogs ‘unaccounted’ for in just one year.

Despite Greytexploitations’ graphic evidence of dogs living in filth and squalor – the GBGB failed to charge Pickering with any welfare offences. A formal letter offering to supply a written or verbal statement substantiating the videos and photographic evidence was never responded to or acknowledged. When bought to their attention – the GBGB also failed to investigate the poor condition of dogs that were rescued from Pickering’s.

Dogs such as Dexter – a 5 week old puppy – who came to Elkie Lonnkvist emaciated – suffering from acute diarrhoea and severely dehydrated.

The pitiful conditions of these dogs inspired Elkie to form Bristol DAWG and she has since gone on to rescue – rehabilitate and re-home many more abused and neglected dogs from Pickering and elsewhere.

Claiming exemption in response to a Freedom of Information request – West Lindsay District Council refused to answer numerous questions that would undoubtedly highlight their abysmal failure to not only enforce a Noise Abatement Order but also planning and breeding establishment legislation and animal welfare law. 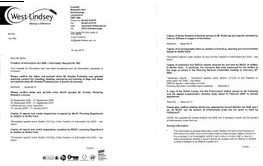 Astonishingly – West Lindsay District Council allowed Pickering to operate a highly commercial breeding farm for at least 8 years whilst he was only granted the legally required planning permission and a breeder’s licence for 2 years – 2005 to 2007.

Documentation available online indicates the council were actually unaware Pickering had been breeding in huge numbers for two years before any enforcement action was considered. Enforcement Action Minutes

Numerous complaints were submitted to West Lindsay District Council and the legal department of Lincolnshire County Council prior to – during and following the investigation – although neither of these authorities had the ‘will’ to take responsibility – financially or legally – for the welfare of up to 180 greyhounds preferring to ‘work with’ Pickering.

Over the years – the RSPCA received many complaints and according to information received by us – the chosen course of action was to monitor the establishment and issue the RSPCA’s own ‘private’ Improvement Notices. Regardless – it was not the charity’s responsibility to privately prosecute Pickering – enforcement of the Animal Welfare Act remains the duty of the local authorities under powers given to them by Parliament.

The GBGB must also bear some responsibility in that earmarking stewards would have regularly visited to tattoo puppies and would therefore have been aware of the appalling conditions.

So more than a year on from the exposure – what has been happening at the ZigZag kennels?

Recent video footage shows that most of the paddocks have been removed and those that remain are overgrown and derelict. The pig arcs are empty and only a handful of horses and one cow can be seen grazing. A horse shelter and a new stable block have been built. The field that contained the puppy/pig pen has been flattened – saplings have been planted with further landscaping underway.

The kennels that housed the broods have been ripped out of the barn and is in a very bad state of disrepair. The stud block houses at least 3 greyhounds although both the dogs and the building ‘appeared’ to be in good condition.

Flowers were laid in memory of the hundreds – if not thousands – of dogs that remain ‘unaccounted’ for and the many more that suffered appalling abuse and neglect at the ZigZag kennels and breeding farm. 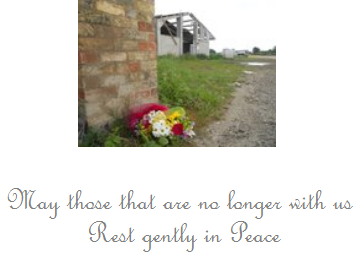