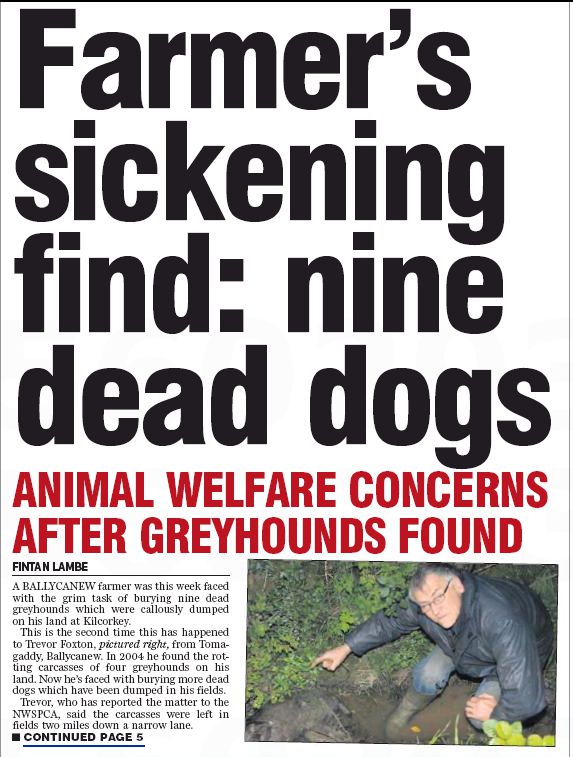 A Ballycanew farmer was this week faced with the grim task of burying nine dead greyhounds which were callously dumped on his land in Kilcorkey.

This is the second time this has happened to Trevor Foxton from Tomagaddy Ballycanew. In 2004 he found the rotting carcasses of four greyhounds on his land. Now he’s faced with burying more dead dogs which have been dumped on his fields.

Trevor, who has reported the matter to the NWSPCA, said the carcasses were left in fields two miles down a narrow lane.

He was alerted by the smell of one of the greyhounds which had been dumped in a drain near the entrance to one field.

“I discovered them at the weekend” he said. “I went out looking for the horses, and then I noticed the smell. I found the first one in the gripe, and then more down a bank. I’ve no idea who would do this” he added. “They even went down through four fields with some of them. I’m the one that’s left now to clean them up” 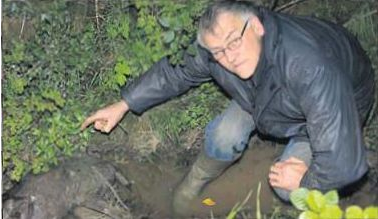 He has reported the matter to the NWSPCA. Colin Webb, chairman of the animal welfare organisation, said they were very concerned at the report. “It’s shocking” he said. “Anyone with information that can help us bring this to an end can contact our emergency response line on 087 6392531 or report it to the Gardaí. We will monitor the area”

Trevor Foxton pointing to one of the dead greyhounds

How you can help:

The Irish Coursing Club (ICC) now requires all breeding sires (males) and bitches (females) to have their DNA registered in a central database.

Please write to the industry’s governing body in Ireland – the Irish Greyhound Board and ask them to immediately investigate this crime. To identify the greyhounds through DNA sampling and bring to justice their last registered owners through the criminal courts.