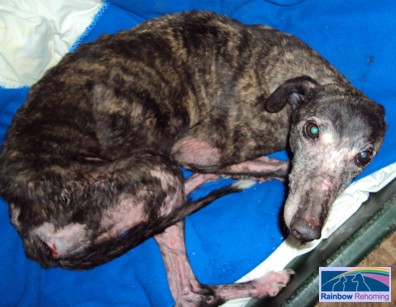 A badly neglected female greyhound found straying near Claudy Northern Ireland with wounds so deep, her hip bones were exposed, may have been dragged on her back suggests a vet.

Staff at the Rainbow Rehoming Centre in Eglington say they are ‘very worried’ about what appears to be the growing trend of neglect of some retired greyhounds in the Londonderry district.

Brianna as she has now been named – is the most recent case to be bought to the centre and raises fears that former racing dogs are being dumped after they lose their competitive edge. 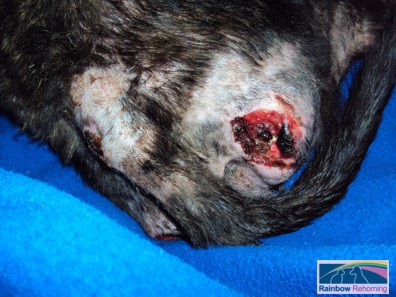 Centre volunteer, Joanne Mullan, said: “A member of the public found the greyhound wandering in a remote country road on Tuesday morning. He was very annoyed at the sight of her and he took her to his own vet to be looked at.”

She continued: “The vet initially believed the wounds she has are bed sores, which are caused from lying on hard, cold surfaces and that they were exacerbated because she has little or no body fat.

While it is obvious the dog has been lying on a hard, cold surface for a very long period, the vet gave the dog some antibiotics and honey for the wounds, but when we brought her back to him on Monday night he said he is not convinced they are, in fact, bed sores.

He thinks it looks like she was dragged on her back end so we can only imagine what happened to her.

The greyhound is a ‘tattooed’ greyhound, so the man who found her then contacted both the PSNI and the USPCA, and the man rang us that night when he felt not enough was being done for the dog.

Understandably, he was very angry at the state the dog was in and said he did not feel the authorities showed sufficient interest in his concerns,”

She said “He brought the dog to our centre on Wednesday night. She is underweight but we have seen much more emaciated dogs. Her body weight was not what concerned staff at the Centre, however, but the open wounds on her hind quarters. They are horrific. The skin and flesh has worn away to such an extent that her bone is exposed”

Said Joanne “We have had many dogs brought into our centre with bed sores, but we have never seen anything this bad. This dog has suffered incredibly and she is clearly underweight.”

She added: “We intend to contact the Irish Greyhound Board because we are concerned about what happens to greyhounds when they are considered no longer any good for racing. Last year we found a greyhound in a coal sack on the banks of the River Foyle that had been drowned and now this one. It is a very worrying development.”

The centre will continue to pressure the IGB to trace Brianna’s former owner, in order someone is held accountable for this dreadful act of abuse and neglect.

Rainbow Rehoming not only work hard to rescue as many animals as possible, they also have an excellent Education and Awareness policy.