Immediate action is needed to end the torture of greyhounds according to a North East Euro MP.

Fiona Hall MEP has signed a Written Declaration in Parliament calling for concrete steps to enforce animal welfare laws across the continent.

“Greyhounds are domestic animals and require greater protection than they are currently receiving.

“Unfortunately, here in the UK and throughout the rest of Europe, greyhounds are being abandoned or killed if their owners deem them unsuitable for hunting or racing.

“While laws differ from country to country it is clear there is a real problem with enforcement and a failure to control the trade and trafficking of dogs.

“I’m calling on the European Commission to take immediate action to end the cruelty.”

“It is estimated that at least 10,000 greyhounds bred for British racing remain unaccounted for every year.

“The welfare of greyhounds needs to be protected from cradle to grave and that can only be done through the introduction of strong enforceable welfare legislation determined by the EU.”

Fiona Hall has proven to be a great advocate for the greyhounds. During the ‘China Crisis’ Fiona tabled a question in the EU over the IGB’s plans to export greyhounds to China and develop dog racing in a country that has no animal welfare laws. 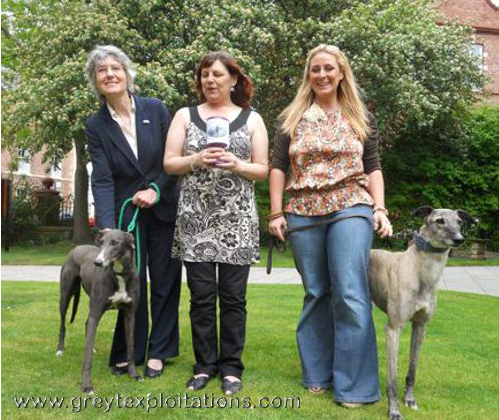 Please click here to find details of your MEP using your postcode and ask them to sign the Written Declaration 0006/2013 calling for an end to greyhound cruelty.

Click here for a Standard Letter that you can copy and paste. A copy of the Declaration can be read here Written Declaration 0006/2013