Where are all the dogs?

Chris Helgren – a Reuters staff photographer and editor – has completed a project for his MA course in photojournalism and documentary photography at London College of Communication.
As part of that project Chris made a video – ‘Welfare managers discuss the problems of re-homing greyhounds’ – inviting opinions from those who have a vested interest in the continuation of dog racing and those who have not. The video also touches briefly on why the industry is in decline.
Not surprisingly Peter Laurie – ex greyhound trainer and now CEO of the industry’s Retired Greyhound Trust – blames the decline of the industry on the increase of greyhound food and the drop in ‘hobby’ owners who have cut back on their consuming spending. Laurie claims it is the RGT who have to pick up the pieces when trainers ‘go to the wall’
However despite earning millions of pounds profit from the gambling on dogs – the bookmakers knowingly grossly under fund the Retired Greyhound Trust and it is left to the public to subsidise the homing of greyhounds discarded by the industry.  Greyhounds deemed of no use as a ‘gambling product’ – many given away ‘free to good home’ or simply abandoned – some having been abused and neglected.
Deb Rothery – founder of Tia Greyhound and Lurcher Rescue – says the re-homing situation is no better than 15 years ago – “Its diabolical really” and if by some miracle all the 80 plus dogs that are in the care of Tia were re-homed in one day – they would be full up again the next day and because of that many are killed and unaccounted for. She says that trainers are facing thousands of pounds worth of debt when owners abandon their responsibilities and fail to pay trainers the kennel fees.
Clarissa Baldwin CEO of the Dogs Trust –  who works closely with the industry and chairs the Greyhound Welfare Forum – would agree and says that she is “quite sure some greyhound owners do put their dogs to sleep” and states that people aren’t making money from greyhound racing any more and this is the reason why tracks are closing. 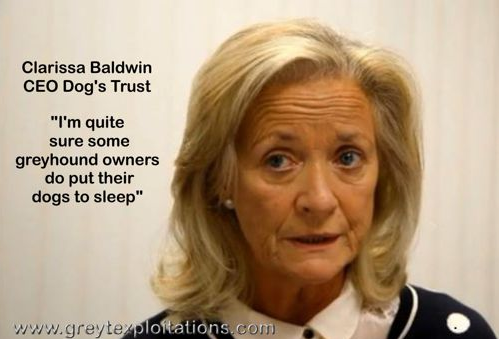 Whatever the claims – without doubt there was immense political and public concern in 2007 to demand an inquiry by the All Party Parliamentary Group for Animal Welfare and further an independent enquiry conducted by Lord Donoughue in 2007.Both reports were commissioned in the wake of the Seaham exposure and the public outcry that ensued.

As a consequence of those reports and the “increasing concerns over the welfare of racing greyhounds” government intervened and called for a public consultation prior to the introduction of the 2010 Greyhound Welfare Regulations.

As part of that consultation – government stated “The objective of these regulations is to improve the welfare of racing greyhounds” and “A secondary effect is expected to be increased public confidence that these standards are being maintained. The improved perception of greyhound racing as a welfare friendly sport should also in turn benefit racing as a leisure industry” click here for the ‘Intervention’ document.

The industry have undoubtedly failed to address their problems in terms of it’s image and is why the industry continues to decline.
Greyhound racing will always depend on inherent cruel practices for its profitability and the destruction of thousands of healthy greyhounds every year is not only condoned by the industry – it is positively promoted on their ‘Retirement Forms’ 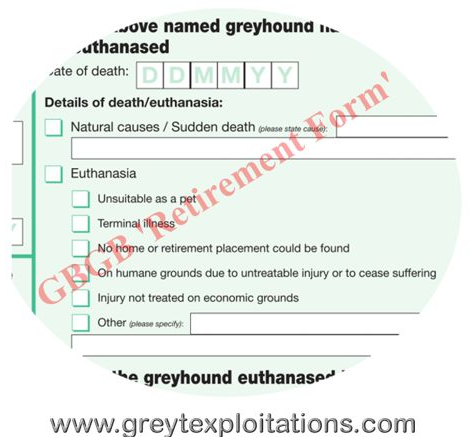