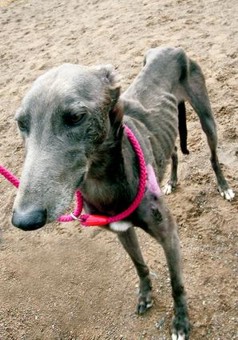 The appalling tide of abandoned and dumped greyhounds continues as yet another greyhound has been found in a ‘near to death’ state less than 3 weeks after Rusty was found at Grimsby docks, curled up and waiting to die whilst being eaten away with maggots.

Bleu, a two year old male, had been thrown over an 8ft fence into enclosed wasteland and was lucky to be found after two or three months, by a passing couple from Kirkcaldy.

Emaciated, dehydrated and flea ridden the couple took Bleu to Langdyke Boarding kennels near Kennoway in Fife, where he is very slowly recovering.

Kennel owner Sylvia Pass said ‘When he was bought here, he had a 50/50 chance of survival. He has no muscle, no flesh. If he lay on his side and shut his eyes you would think he had been dead for a couple of weeks, he’s that bad’

Bleu did not break any bones but damaged his left shoulder and medical treatment since his rescue has increased Bleu’s chances of survival.

Ms Pass added: “I would give Bleu a 75% chance of surviving now after being just days from death.”