Walthamstow dog track finally closed its doors in August 2008 and a further three tracks have since followed suit . The industry’s income – betting receipts – has declined by 23% in the last twelve months and over 50% in the last 3 years – despite over a million pounds spent on TV and marketing campaigns in a desperate attempt to revive dog racing.

Internationally greyhound racing has been in decline for a number of years – GREY2K USA having successfully campaigned to close down half of the industry over a ten year period – with only 25 tracks remaining operational.

Not surprising then – the former owners of Walthamstow dog track reluctantly made the decision to sell – announcing that the venue was no longer commercially viable due to plummeting attendances and falling income streams – largely track side betting.

The site was sold to social housing landlords – London & Quadrant – who have since submitted plans to  develop the site and build a mix of much needed affordable and private housing with extensive onsite leisure facilities. L&Q have always maintained that any proposal to bring greyhound racing back to Walthamstow would be unviable.

However a group of emotionally charged trainers and owners – Save Our Stow – have campaigned to bring the gambling on dogs back to Walthamstow and have fiercely opposed L&Q’s proposals.

Backed by local MP Stella Creasy – a member of the All-Party Parliamentary Greyhound Group whose purpose it is ‘To raise parliamentary awareness of issues relating to the greyhound industry and to promote the sport’ – has devoted much of her time in support of the SOS campaign members –  none of whom live in the Walthamstow.

The financial backing for this venture comes in the form of Bob Morton who currently owns a half share in Henlow dog track.

In a Racing Post article dated December 17th 2008 – Mr Morton considered that ‘He saw Walthamstow as representing too much capital for insufficient return, and believes that will hamper any rescue bid’ We can only assume that the price of £9m Mr Morton is now prepared to pay for the site – just 50% of the purchase price less than three years ago – is an indication to his lack of confidence in the track’s viability.

The track’s viability was further brought into question when the industry’s promoters – the Greyhound Board of Great Britain – refused a request from the Save Our Stow campaign for funding to refurbish the stands at Walthamstow.

Astonishingly – Mr Morton has pledged that should Walthamstow re-open – it will have ‘the best possible welfare procedures’ – ‘possible’ being the operative word. Despite Mr Morton’s assurances – he will have no control over the inherent cruel practices that the betting on dogs perpetuates and depends on for its very existence.

No control over the culling of puppies that are disinterested in chasing the mechanical lure or are deemed too slow to ‘make the grade’ as betting units.

And sadly – Mr Morton have no control over the self employed – self regulated trainers or the welfare standards they fail to adopt – painfully evidenced with the appalling treatment in 2009 of greyhounds in the ‘care’ of Joanne Page – a professional trainer attached to Mr Morton’s Henlow stadium.

Not only was Ms Page exposed for refusing to retire four healthy greyhounds – preferring to have the dogs destroyed – she later retired three severely neglected and abused greyhounds to a greyhound re-homing charity – costing them thousands of pounds in emergency surgery and veterinary treatment.

‘Harrishill Flyer’ who had been racing only two months previously and passed fit to race by the track vet – needed 38 teeth extracted and part of his jaw bone removed because of two untreated abscesses. ‘Mitch Who’ was found to have severe dental neglect and needed 19 teeth removed but a third greyhound – Milton – had a small hole which went straight through his skull narrowly missing his cranial cavity containing the brain.

Reported to the self policing Greyhound Board of Great Britain – who do not enforce the Animal Welfare Act – Ms Page was leniently fined £500 and her license suspended for 6 months under the Rules of Racing – for the suffering she subjected these greyhounds to.

Neither does the Greyhound Board of Great Britain under self regulation – enforce aspects of criminal law and trainers found guilty of possession of class A drugs fail to be prosecuted in a court of law and are dealt with internally by the industry’s governing body.

In an independent report of the GBGB Anti-doping and Medication Rules 2010 – the review committee stated “We were told by several witnesses that cocaine was being administered (either as a paste smeared on the gum, or as a powder puffer, or in a time release gelatine capsule) in an apparent attempt to create a ‘rush’ just before the dog enters the trap. There have been ten positives for cocaine metabolites since 2005 but more post-racing tests will be required to determine whether there is really a problem”

As a consequence of the lenient penalties awarded by the industry – Mr Mason continues to train and race greyhounds in his ‘care’ and to the enjoy the freedom of a law abiding citizen.

SOS campaigners claim the re-opening of the dog track will generate more than 500 jobs although Walthamstow only sustained 60 full jobs and 400 part time jobs before its closure – many of the trainers moving on and are currently supplying the ‘betting product’ to other tracks.

The motivation behind the SOS campaign to re-open Walthamstow dog track has little to do with creating jobs or community spirit – it is to do with people satisfying their own self serving interests – financially and or psychologically – regardless of the risks to the dogs.

The people of Walthamstow deserve better than to be used as a Trojan Horse – harbouring a gambling industry that continually supports and effectively promotes cruel and criminal activity within our communities.

Update: Dogs Trust and League against Cruel Sports refute claims made by the Save Our Stow Campaign that the two welfare groups are in support of dog racing returning to the Stow.

The cruelty and suffering must stop – please click on image for details of how you can help. 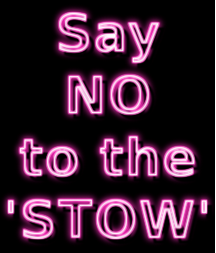