Abused and Abandoned – Do you know who did this? 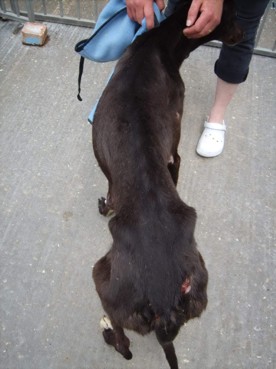 Volunteers at Fen Bank Greyhound Sanctuary have been shocked by the level of cruelty and neglect suffered by a greyhound found on wasteland near Grimsby Dock.

The black two year old male greyhound, was found by a passer by and in such a weakened state, had to be carried to the car and taken for immediate emergency treatment and care. Although earmarked, it has not been possible – as yet – to trace his former ‘owner’ and staff have affectionately named him Rusty.

Founder of the sanctuary Sandra Davis, said the greyhound was in the worst condition she had ever seen in 25 years and would have died within 24 hours had he not been rescued.

The pressure sores are down to the bare bone, and both wrists are leaking fluid when he walks. Covered in urine burns and his fur matted with faeces, this poor boy had to endure maggots living off his flesh around his bottom. 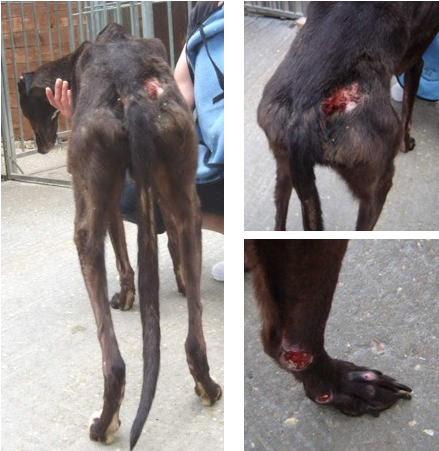 Trustee of Fen Bank Greyhound Sanctuary, Jill Kirby said “Despite everything he has gone through, Rusty has one of the waggiest tails in the kennels and loves all the attention. He is responding well to a special diet and treatment and has already put on a couple of kilos in 10 days but it’s a slow process and Rusty wont be healthy enough for re-homing for some time yet”

Another greyhound was found washed up on a near by beach between Sandilands and Sutton-on-Sea. Sadly, there have been previous reports of greyhounds found in similar circumstances and Jill fears, this most recent case will not be the last.

Naturally anxious to find those guilty of this despicable crime, Sandra said “I want to know as much as I can to make sure these people don’t have any other dogs. If anybody wants to call anonymously then I will happily listen”

If you have any information on the dumping or drowning of dogs in Grimsby or the surrounding area, please contact info@greytexploitations.com – again in the strictest confidence.