Greyt Exploitations in the media 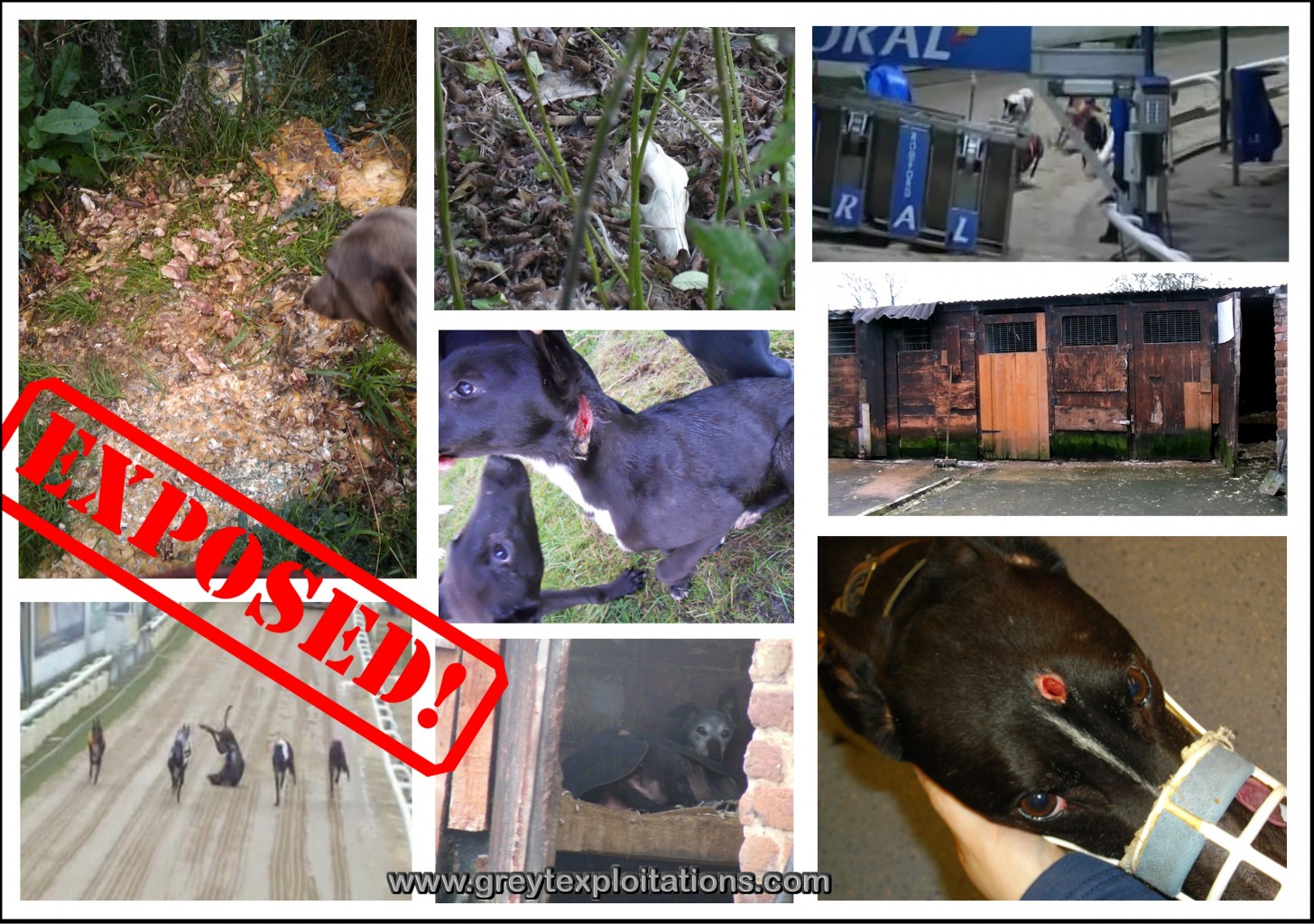 Greyt Exploitations works hard to expose the cruelty and criminal activity which the racing industry depends on to remain profitable and sustainable. We invest heavily in research – sourcing credible evidence to not only raise awareness with the public through the media but also in the political arena to press for stronger legislation and an eventual ban.

Here are just some of the articles where Greyt Exploitations have obtained national and local media coverage.

October 2020 Thank you Closer Magazine for inviting is to comment on this fabulous double page report on greyhound racing and adoption! 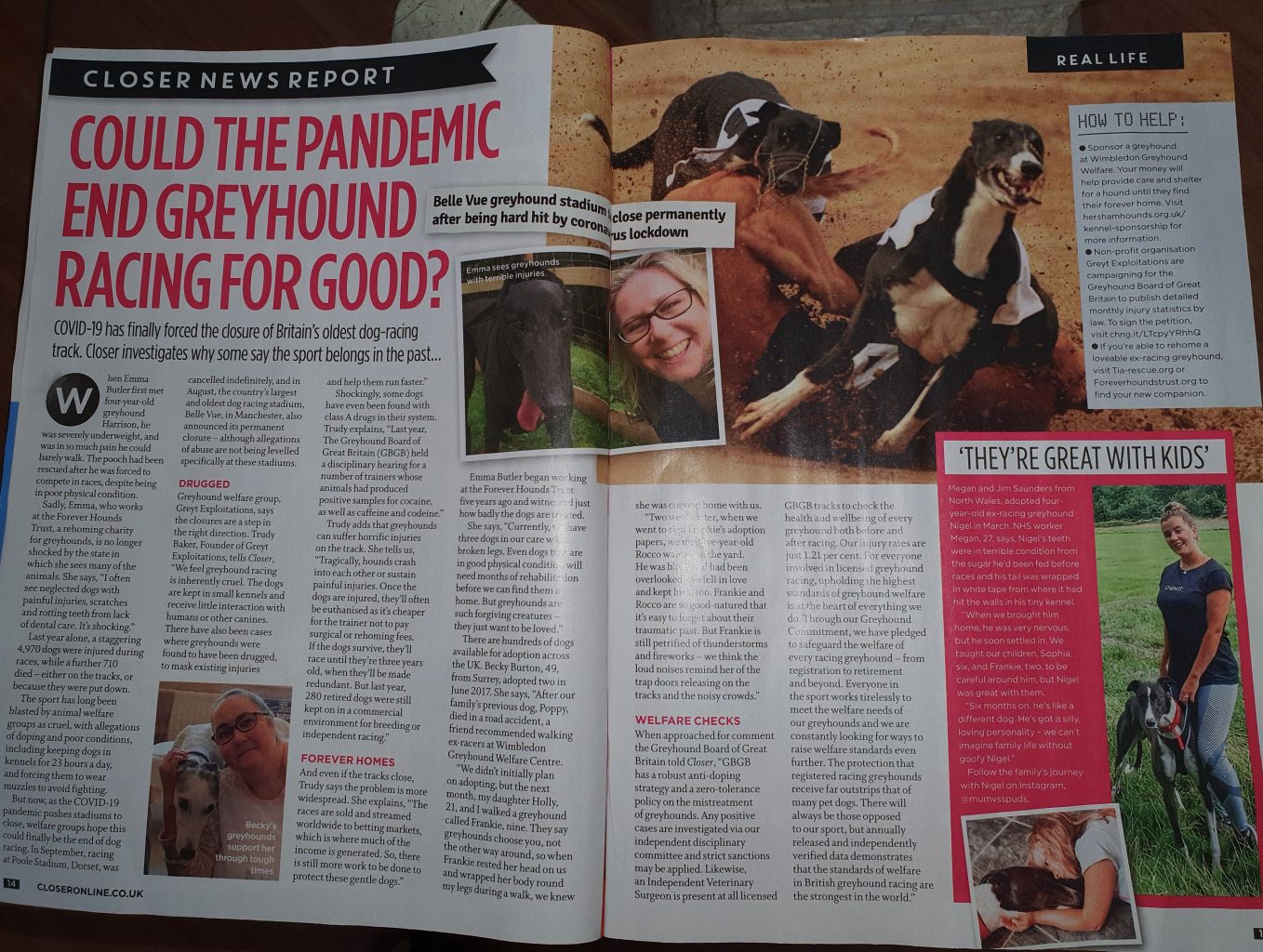 July 26th 2019 The Ecologist publishes an excellent article on the new GBGB’s Hot Weather Policy with comment from Greyt Exploitations and The League Against Cruel Sports. Racing greyhounds on Britain’s hottest day

July 6th 2019 Ralph Jones investigates cocaine positives from all aspects – advocacy – trainers and regulators. Amongst other issues we dismiss the GBGB claims that “there is a good chance a trainer will get caught” by using industry figures that show “There were more than 400,000 dogs that started a race in 2017 that weren’t tested before that race. How on earth can you say there’s a good chance you’ll get caught if you use cocaine?” People are giving their greyhounds cocaine to make them run faster

June 20th 2019 We were very pleased to be invited to comment in The Telegraph’s in-depth article penned by Sohpie Smith on the current state of greyhound racing. Despite pleas from both the GBGB and Neil Parish MP for more funding from the bookmakers to address ongoing welfare issues – we emphasis that no amount of funding will address the thousands of inevitable injuries and deaths caused by the dangerous configuration of tracks. Gone to the dogs: why the future of greyhound racing rests in the hands of the bookies 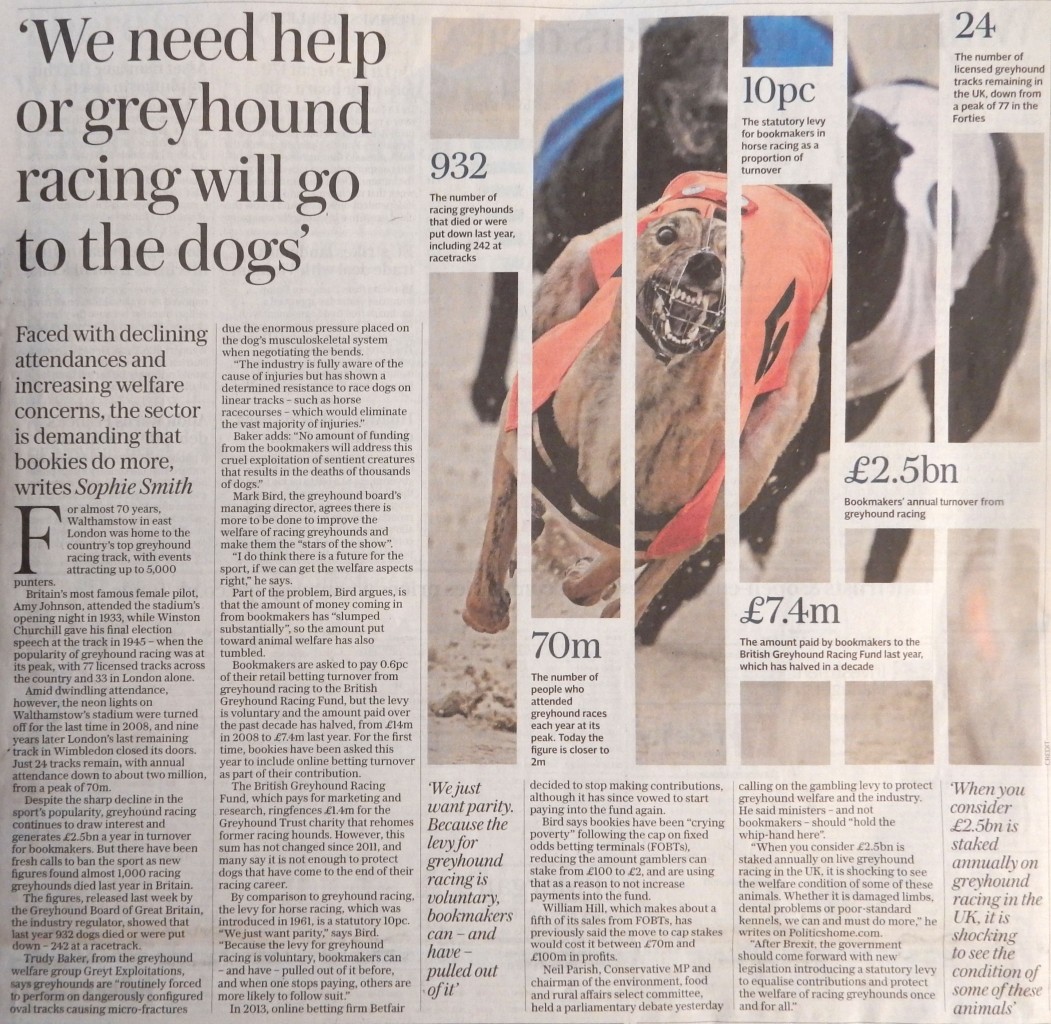 June 19th The Ecologist picks up on the League Against Cruel Sports press release and publishes an article on the GBGB’s 2018 injury and death figures. Again we question how can greyhounds that remain in a commercial environment be classed as ‘retired’. Greyhound industry figures reveal misery

June 17th UNILAD publish an excellent article not only highlighting the GBGB’s death and injury figures but also touches on the decline of the industry. Calls For End To Greyhound Racing After 1000 Deaths Last Year

June 16th 2019 The Guardian’s Mattha Bushby pens a great article emphasising calls for a ban by Greyt Exploitations and The League Against Cruel Sports following the GBGB’s release of 2018’s injury and death figures. Charities call for end to greyhound racing after 1,000 deaths in a year.

April 13th 2019 The Independent publishes an article on cocaine positives. We question “how many of the 56 that died a sudden death on track and the 307 dogs put to sleep – deemed unsuitable for homing – were damaged by drugs.” Cocaine found in greyhound called Sniffing Out as sport chiefs warn of drug spike among race dogs. Vegan News also covers the same story on April 15th “Cocaine Found in Race Dog May Have Been Used to Improve Performance”

July 30th 2018 Vet magazine publishes concerns from The League Against Cruel Sports and Greyt Exploitations over the racing of greyhounds in extreme temperatures. Concerns over racing greyhounds during heatwave

22nd March 2018 It was good to get some local media coverage in the North East where there are three GBGB tracks all within a radius of 40 miles.

July 7th 2016 Greyt Exploitations are invited to a live debate on the BBC Radio Ulster’s Talkback show. Aileen Ward states clearly and passionately why greyhound should be banned.

April 4th 2016 Wandsworth Radio invited us to raise awareness in South London and give their listeners the opportunity to make an informed decision on whether they want a cruel gambling industry to remain at Wimbledon.

March 2nd 2016 The Wimbledon Guardian interviews Greyt Exploitations where we argue the greyhound’s case for the closure of Wimbledon dog track. Craig Richard reports  Greyhound racing welfare organisation argue the sport is “only sustainable due to cruelty”

February 22nd 2016 The EFRA report publishes evidence submitted by Greyt Exploitations to the Select Committee detailing the number of track injuries. We were the only welfare group who were able to challenge the industry’s misleading injury figures and without doubt contributed to Efra’s recommendation that  ‘Defra amend the 2010 Regulations to require the publication of essential welfare data relating to injury, euthanasia and rehoming numbers’ in their Greyhound Welfare Report (Current data – paragraphs 36 to 4)

December 2015 Dogs Today magazine interviews Greyt Exploitations publishing a three page feature on racing injuries. We were able to supply extensive details of the hundreds greyhounds that go unaccounted for each year following injury and evidence the cruelty involved of the dangerously configured tracks.  The industry’s Right To Reply left the reader in doubt the industry lacks transparency has something to hide. Victoria Haywoods’s article can be seen here ‘The disappearing dogs’

February 22nd 2015 Following 4 years of research The Sunday Times helps launch Greyt Exploitations Injury Database website and runs with the headline ‘40,000 racing greyhounds hurt‘ leaving the industry unable to defend their already weak position – refusing to provide any figures and even claiming they do not hold any information relating to injuries. Quite astonishing for an industry that claims greyhound welfare is their number one priority.

February 6th 2015 The Daily Mail runs a story on an incident at Romford dog track – where staff failed to remove the starting traps from the track leaving 6 greyhounds to smash into stationary traps. Greyt Exploitations’ supplied exclusive video footage and track injury data for this national story – ‘Horrifying moment greyhounds smashed into the traps’. The exposure was only possible due the funds Greyt Exploitations have invested in satellite equipment enabling us to record races normally seen in betting shops.

February 9th 2015 The Romford Recorder importantly picks up on our story of greyhounds running into traps at the local dog track – giving the people of Romford an insight of the hundreds of greyhounds that fail to race again following injury each and every year. Sam Gelder reports Video: Investigation launched after dogs smash into traps at Romford Greyhound Stadium. 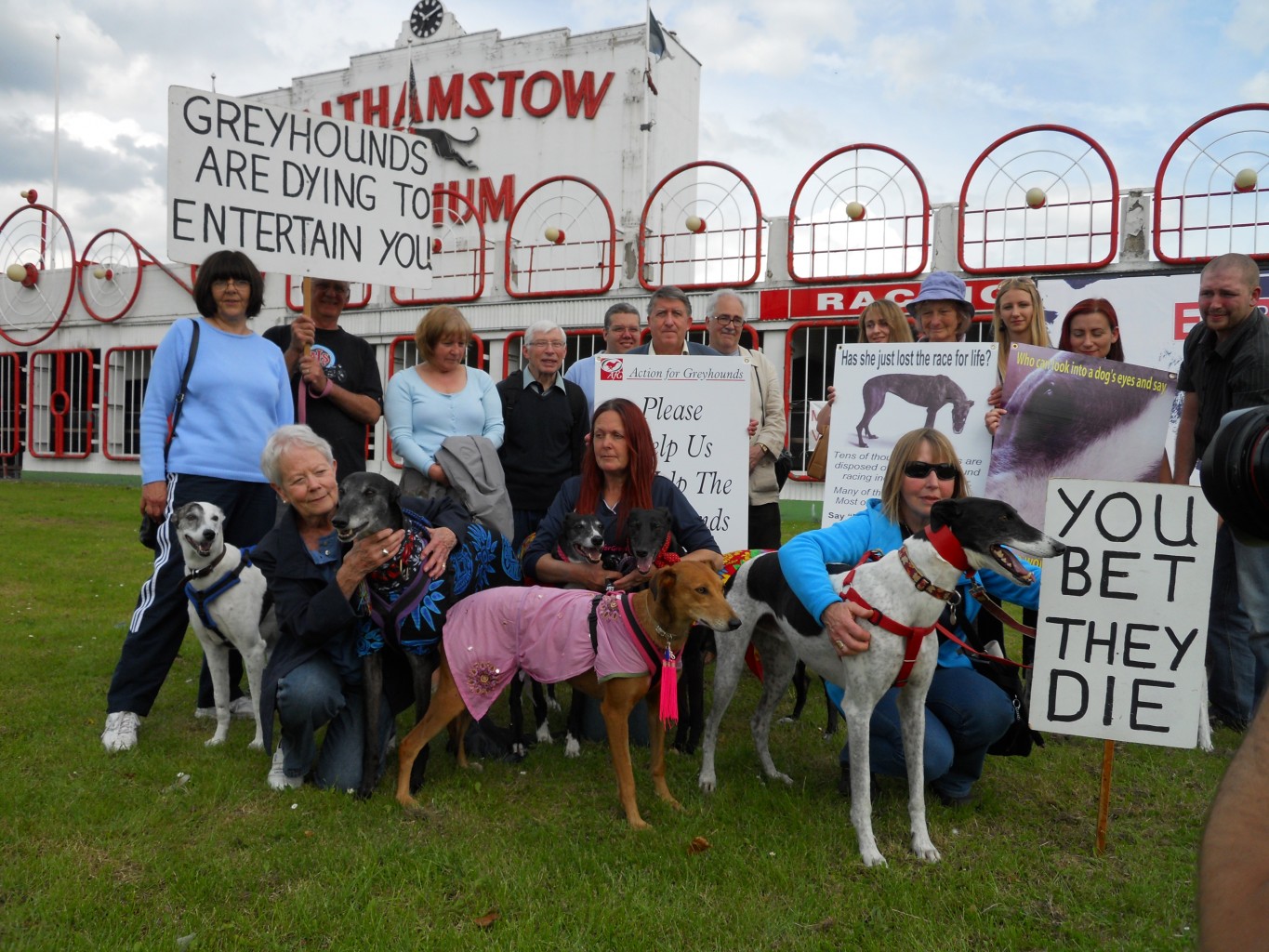 At last some media coverage in favour of the greyhounds in the fight to keep Walthamstow dog track firmly closed. The Chingford Guardian covers a rally held by greyhound advocates – attended by the much respected Annette Crosbie OBE – with the headline CHINGFORD: Anti-dog racing group hold Stow rally.

February 22nd 2012 The BBC publish an article ‘Finding Homes for retired racers’ where Greyt Exploitations are invited to comment and express their concerns over the industry’s lack of transparency and failure to account the thousands of greyhounds bred for British racing every year. 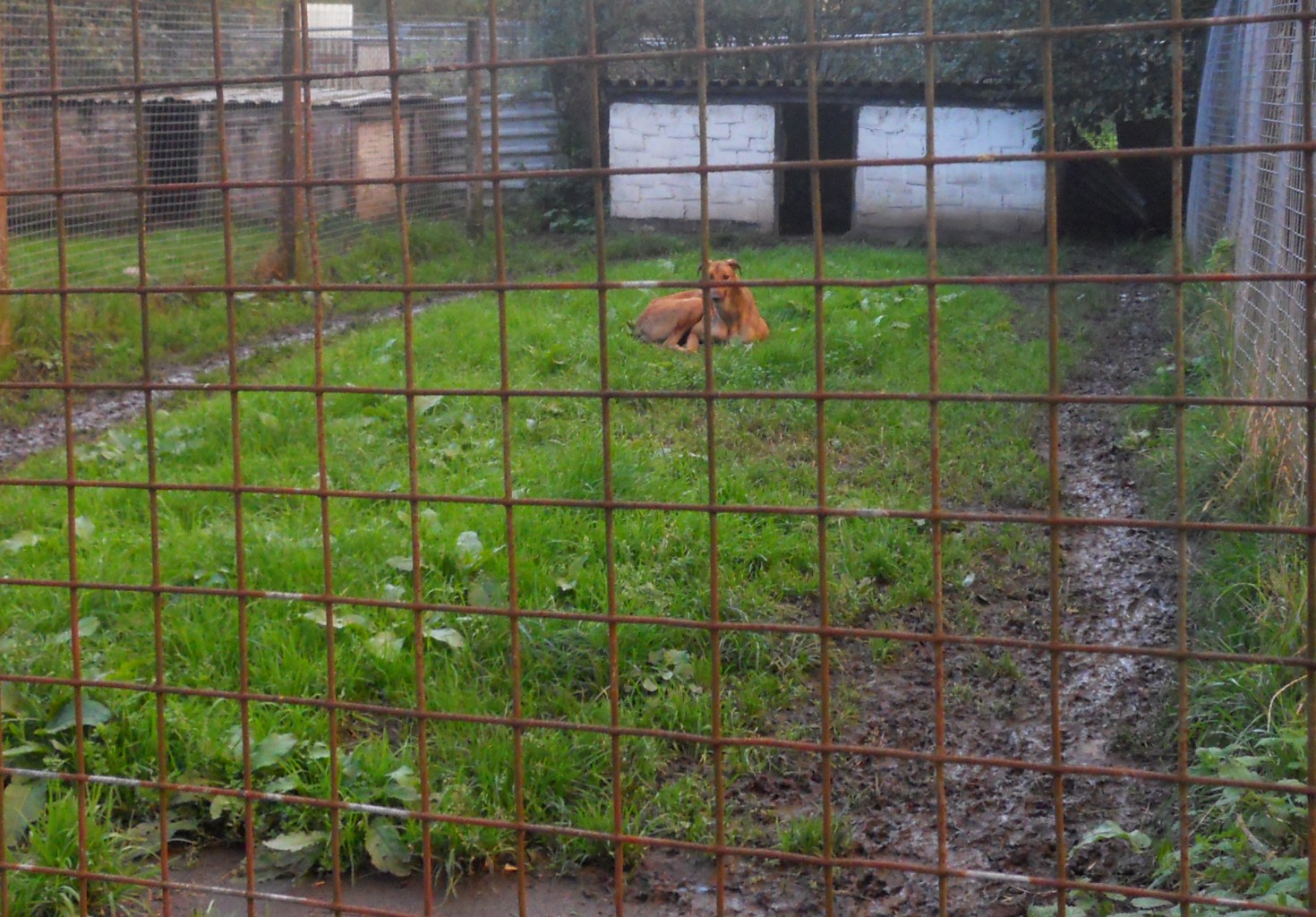 January 22nd 2012 Following an extensive investigation by Greyt Exploitations of two professional trainers kennels in Manchester – the Sunday Express publishes an article – Dog kennels branded ‘disgusting’ – and on the day the Greyhound Board of Great Britain held their glitzy Annual Awards in London’s Lancaster Hotel. As a result of this article – the industry developed a 5 year plan to improve kennel conditions and issued all area stewards with video cameras.

July 12th 2011 Greyt Exploitations are invited to provide a statement on the case of Anthony Fowler – an independent greyhound trainer who was found guilty in a criminal court of giving his greyhound viagra and cannabis. We sieze the opportunity to highlight much more serious cocaine offenses again highlighting the criminal activity within commercial dog racing. The story was covered by much of the national press but more extensively in the local media Greyhound was given Viagra and cannabis

May 20th 2011 The Irish Post affords us a double page spread covering the Irish Greyhounds Boards plans to develop dog racing in China. 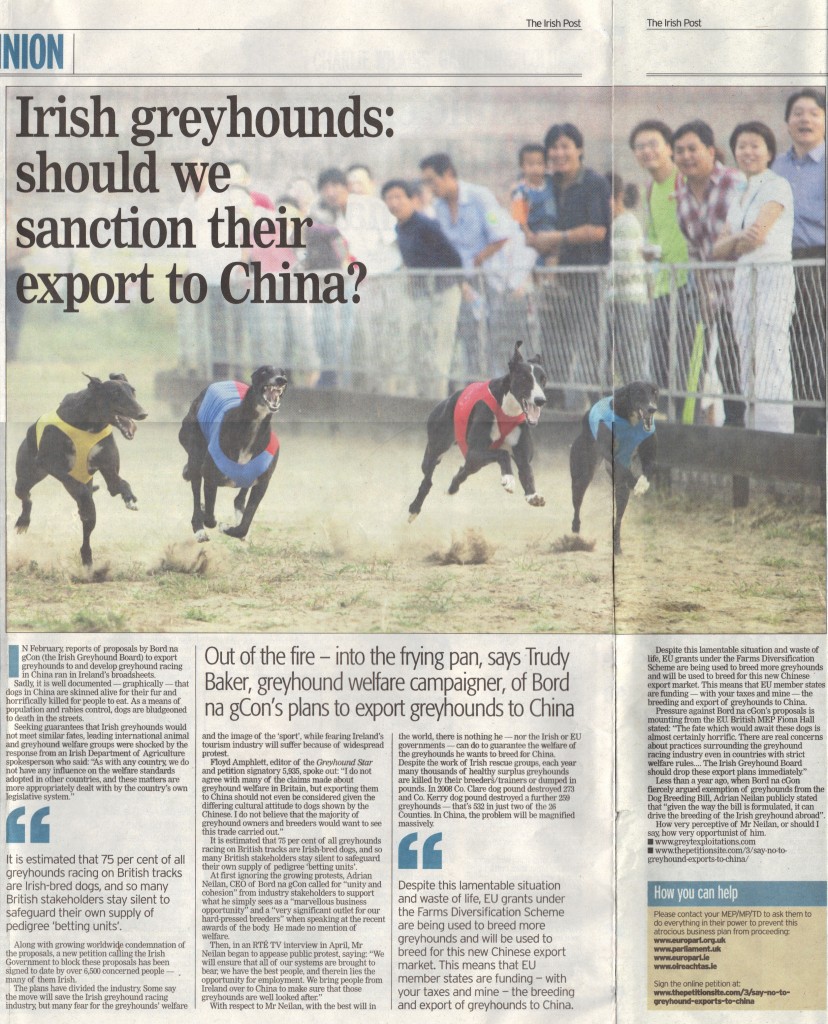 April 12th 2011 Following the Irish Greyhound Board’s announcement to develop dog racing in China – Greyt Exploitations met with MEP Fiona Hall and MP Ian Swales to raise the issue both in the European and British parliaments. An article in the local newspaper highlights the issue MP backs call to stop dog deal and a statement from the Lib Dems is published on their regional website Howl of protest over ‘appalling’ greyhound deal

September 2010 Greyt Exploitations contributes to an article on the use 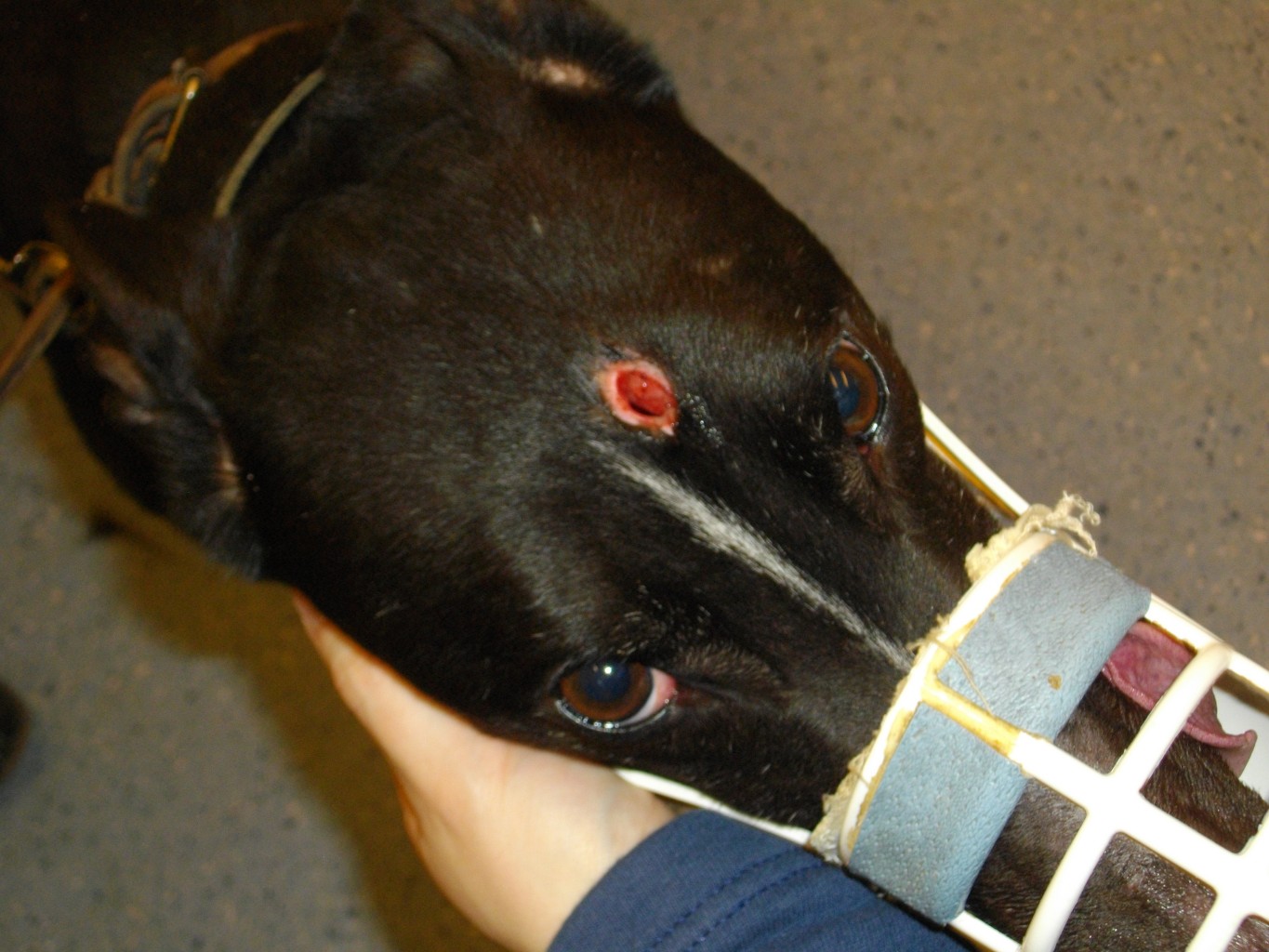 of captive bolt guns as a means to destroy dogs and details incidents where greyhounds have been destroyed using this perfectly legal method. No Licence to Kill – written by Nick Mays – helps to raise awareness of the systematic destruction of healthy greyhounds as economically as possible.

30th May 2010 Footage obtained by Greyt Exploitations following a lengthy investigation leads to national exposure in the Sunday Express. We had only ben campainging for 2 years and had yet to develop some credibility and so the exposure went out under the banner of the now inactive group Greyhound Action. Ted Jeory pens the article Agony of Caged Greyhounds.

June 29th 2009 Greyt Exploitations exposure of Eve Blanchard’s kennels makes the local newspaper which were understandably played down by the trainer – industry and very sadly the RSPCA. However – the media coverage forced the industry to provide a grant for kennel improvements. The article can be seen here North Dorset greyhound trainer asked to improve kennel standards.