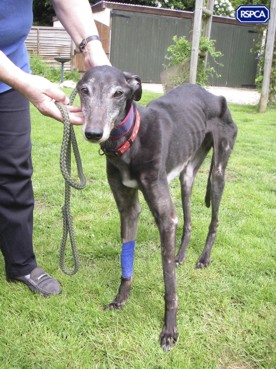 The RSPCA have granted Greyt Exploitations permission to publish photographs of Tara, the female greyhound who was starved to near death by her owner and recently prosecuted Brian Brunton. Although the courts banned Brunton from keeping animals for life, he will be allowed to make an application to revoke the life time ban after only five years.

Tara was found staggering down a road in May 08. Brunton claimed to have re-homed her in February 2008 and he maintained this excuse until the court hearing when all the witnesses attended court and his plea changed to guilty.  Tara had escaped from his flat on the day she was found, severely dehydrated and staggering due to her weak state. Vets confirmed she would have been suffering from a lack of food for weeks. Tara was immediately put on a drip, receiving fluids for four hours. How this poor girl survived such neglect and cruelty is a miracle but survive she did. 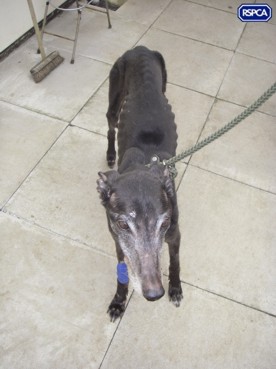 Although not reported in court – Brian Brunton had bred and owned greyhounds for many years. In 2005 he purchased a black female greyhound called Tarzans Lark – very likely Tara – shortly after she finished her career as a ‘betting medium’ at Swindon. He swiftly mated Tarzans Lark with Shevchenko and she gave birth to a litter of three boys and two girls in the following October.

Sadly only four of the five siblings were named and of those five – none went on to contest a race. In view of the starvation and neglect Tara had endured at the hands of Brunton, you really have to question the fate of the five greyhounds Brunton bred in 2005.

Magistrates said the photographs of Tara, made them almost physically sick and Brian Brunton of 14 Jubilee Flats, Parkway,  Siddington, Circencester – as well as his life time ban – was also given an 18 month community order with an18 month supervision requirement, 100 hours of unpaid work and £500 costs. In mitigation he said he had financial problems and suffered from depression.

Thankfully, Tara has now recovered from her neglect and has been successfully re-homed by the RSPCA – who yet again have had to seek justice for the ‘waste products’ of the racing industry.